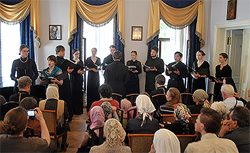 On May 26, 2013, a combined youth choir from the parishes of the Russian Orthodox Church Outside of Russia, under the direction of Nicholas Kotar, a student of Holy Trinity Seminary in Jordanville, NY, performed at Marfo-Mariinsky Convent of Mercy in Moscow, Russia. Students, seminarians, active parishioners and choir singers from the churches of the Eastern American, Western American and Canadian dioceses presented a program honoring the 400th anniversary of the Romanov Dynasty. His Grace Bishop Theodosius of Seattle, Vicar of the Western American Diocese, and Protopriest Andrei Sommer, Vice President of ROCOR’s Synodal Youth Department, led the delegation of singers.

“The choir singers were raised in various types of families—some Orthodox, others joined our Church upon maturity in those ‘faraway lands.’ We hope that this concert will bring you spiritual joy and help inspire your continued service,” said Vladyka Theodosius before the concert, addressing the guests and the nurses in attendance.

His Grace then gave Abbess Ekaterina (Pozdnyakova), head of the convent, a copy of the Kursk-Root Icon of the Mother of God “of the Sign,” the Protectress of the Russian diaspora.

Nicholas Kotar, who directs his own seminary’s choir, told Tserkovny vestnik about the program the youth choir has prepared for their trip to Russia: “In ROCOR, we always revered the memory of the Royal Martyrs, and officially glorified them in 1981. We decided to prepare a special literary-musical concert on this 400th anniversary: liturgical music alternates with readings from the letters of Holy Grand Duchess Elizaveta Feodorovna as well as excerpts from a biography of the saint by Lyubov Miller.

“Today we are performing in Moscow; the other day we sang in St Petersburg’s Theological Academy—this is a unique event for the Russian diaspora and the culmination of plans set down in the USA and France, where we had already performed. Today’s young believers in America are very interested in Orthodox culture. The combined choir consists of youth from various parishes of North America; it is our creative experiment. Personally, I hope that in the future we can organize larger events, adding photos and videos,” said Nicholas.

Alexandra Wolkow, a singer from St Seraphim Church in Sea Cliff, NY, feels that the performance of the combined choir in Moscow and St Petersburg helps the unity of the Russian Orthodox diaspora with the Russian Church in Russia: “For me our performances in Russia are a path to the unity of our Churches in prayer. I especially sensed this yesterday in the Kremlin, during divine services led by His Holiness Patriarch Kirill on his namesday. During the service and the procession of the cross through the streets of Moscow, we felt that we were parts of one Church.”