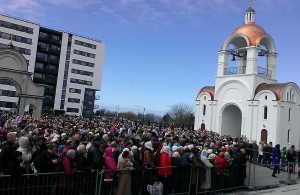 The ceremony, held on what was Easter Sunday on the Orthodox calendar, took place outdoors, as the church is still under construction, rus.err.ee reported.

“The celebration of the resurrection of Christ will be marked by the ringing of the first bell from this tower, so that the ringing would be heard throughout the district and that everyone hearing this sound would head to the church to pray,” said Metropolitan Kornelius of the Estonian Orthodox Church, who officiated at the event.

The metropolitan also thanked all those who were involved in the building of the church.

With construction spanning close to a decade, the Lasnamäe church is nearing completion and the official opening is planned for September 29. That event will be preceded by the church’s first service when Moscow Patriarch Kirill visits in June.