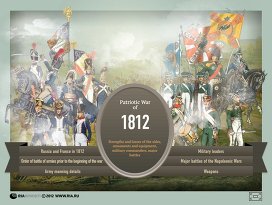 Thousands of people gathered at downtown Moscow’s Christ the Saviour Cathedral where Russian Orthodox Patriarch Kirill presided at a service commemorating the 200th anniversary of Russia’s victory over Napoleon’s invading army in 1812.

“What happened 200 years ago is the greatest example and lesson for us today, and not only for us but also for the whole Europe,” Patriarch of Moscow and All Russia Kirill said after the service.

“We believe that through these celebrations we will not only recall those events, but will also in our hearts and minds join the great struggle that our honorable predecessors led for their faith and their fatherland,” the patriarch said. “We should be united by the ideas for which we can and should sacrifice our lives.”

The prayer was held in front of the miracle-working icon of Our Lady of Smolensk (Hodegetria), before which Russian military commanders and soldiers prayed on the eve of the Battle of Borodino.

The Battle of Borodino occurred on September 7, 1812, during France’s invasion of Russia. Overall, more than 70,000 were killed, wounded and captured.