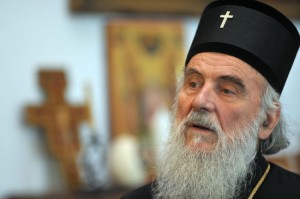 As an ideal place for the meeting of the Catholic and Orthodox Church, the Patriarch named Nis, noting that the anniversary of 1700 years of the Edict of Milan an opportunity for numerous representatives of Christian churches and communities to, after centuries, meet in the place of great importance and enter into a dialogue.

Patriarch Irinej also said that, especially for Catholic and Orthodox Church, “which are close to each other, would be of great significance that after so many centuries come a conversation” and suggested holding of an ecumenical council.

When asked about the possibility of the coming of the Pope to Serbia, Patriarch Irinej said that more than 200,000 Serbs had to leave their “homes and churches” in Croatia and they now live in bad conditions in Serbia, saying that among them “there are very many of those who would not be glad to see the Pope coming”.

Irinej warned that, “if some of those unsatisfied people would do harm to the Pope, than it would cast a dark shadow on our Church and our people,” and said that the time for the Pope’s visit is “not ripe”.

“We do not know if his safety can be taken care of enough in the country. At the end, even in Rome an assassination was performed on the Pope,” said Patriarch Irinej in the first interview that a Patriarch of Serbian Orthodox Church gave to the German media.

Patriarch Irinej also said that there are pessimists in Serbia “who see every contact with representatives of the Roman Catholic Church as detrimental to Orthodoxy, which is absolutely wrong and cannot be accepted”.