Translation of the relics of St. Nicholas the Wonderworker from Myra to Bari, in 1087

Our beloved holy Father Nicholas is, along with St George (and second to the All-holy Theotokos), probably the best-loved Saint of the Church. His numberless miracles through the ages, on behalf of the countless Christians who have called on him, cannot be told. He was born in Lycia (in Asia Minor) around the end of the third century, to pious Christian parents.
admin | 08 May 2006 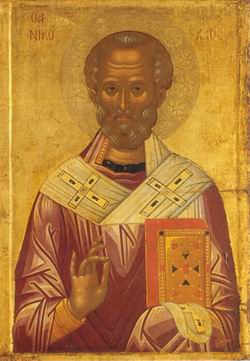 Our beloved holy Father Nicholas is, along with St George (and second to the All-holy Theotokos), probably the best-loved Saint of the Church. His numberless miracles through the ages, on behalf of the countless Christians who have called on him, cannot be told.

He was born in Lycia (in Asia Minor) around the end of the third century, to pious Christian parents. His love of virtue, and his zeal for observing the canons of the Church, were evident from his infancy, when he would abstain from his mother’s breast every Wednesday and Friday until the evening. From early youth he was inclined to solitude and silence; in fact, not a single written or spoken word of the Saint has come down to us.

Nicholas was taught by his parents to love the Lord with his whole mind, heart, soul, and with ail his strength. When they died he inherited their money. He used this to help the poor, the hungry, and the sick. Whenever he helped anyone he did it secretly, so that only God would know, He did not want praise from people; he wanted his reward to be only in Heaven.

After he gave away the money his parents had left him he decided to become a monk. He went to a monastery where he lived and worked and prayed, intending to spend the rest of his life repenting of his sins. But soon it became clear that God wanted him to be a priest, and so he began to study the Law of God.

St. Nicholas became the parish priest of a village church after his ordination. He worked very hard, instructing his flock and helping those in need. He also performed all the Divine Services and was a spiritual father to all.

Though ordained a priest by his uncle, Archbishop Nicholas, he attempted to withdraw to a hermit’s life in the Holy Land; but he was told by revelation that he was to return home to serve the Church publicly and be the salvation of many souls.

When his parents died, he gave away all of his inheritance to the needy, and thereafter almsgiving was his greatest glory. He always took particular care that his charity be done in secret. Perhaps the most famous story of his open-handedness concerns a debt-ridden man who had no money to provide dowries for his daughters, or even to support them, and in despair had resolved to give them into prostitution. On three successive nights the Saint threw a bag of gold into the window of the man’s house, saving him and his daughters from sin and hopelessness. The man searched relentlessly to find and thank his benefactor; when at last he discovered that it was Nicholas, the Saint made him promise not to reveal the good deed until after he had died. (This story may be the thin thread that connects the Saint with the modern-day Santa Claus). 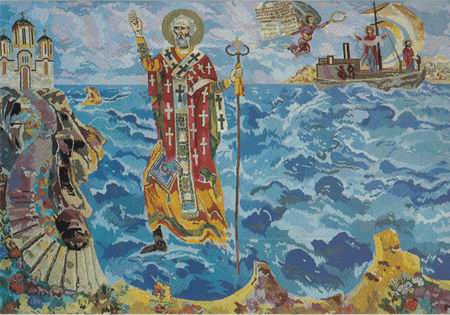 God honored his faithfulness by granting him unparalleled gifts of healing and wonderworking. Several times he calmed storms by his prayers and saved the ship that he was sailing in. Through the centuries he has often done the same for sailors who call out to him, and is considered the patron of sailors and all who go to sea. 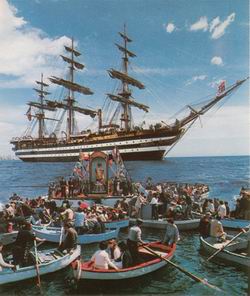 He was elected Bishop of Myra not long before the great persecutions under Diocletian and Maximian (c. 305), and was put in prison, from which he continued to encourage his flock in the Faith. When the Arian heresy wracked the Church not long after Constantine came to the throne, St Nicholas was one of the 318 Bishops who gathered in Nicea in 325. There he was so incensed at the blasphemies of Arius that he struck him on the face. This put the other bishops in a quandary, since the canons require that any hierarch who strikes anyone must be deposed. Sadly, they prepared to depose the holy Nicholas; but in the night the Lord Jesus and the most Holy Theotokos appeared to them, telling them that the Saint had acted solely out of love for Truth, not from hatred or passion, and that they should not act against him.

While still in the flesh, he sometimes miraculously appeared in distant places to save the lives of the faithful. He once saved the city of Myra from famine by appearing to the captain of a ship full of grain, telling him to take his cargo to the city. He appeared in a dream to Constantine to intercede for the lives of three Roman officers who had been falsely condemned; the three grateful soldiers later became monks.

The holy bishop reposed in peace around 345. His holy relics were placed in a church built in his honor in Myra, where they were venerated by throngs of pilgrims every year. In 1087, after Myra was conquered by the Saracens, the Saint’s relics were translated to Bari in southern Italy, where they are venerated today. Every year, quantities of fragrant myrrh are gathered from the casket containing his holy relics.

In 1087 the Saint’s relics were taken from Myra in Lycia (on the southern coast of present-day Turkey) to the town of Bari in Italy. This was done due to a Muslim attack on Lycia. At that time Bari was Orthodox and under the administration of the Patriarch of Constantinople. The Saint’s relics now lie in a Roman Catholic church in Bari; each year the casket containing the relics is opened by a Roman Catholic and Orthodox bishop together, and quantities of fragrant myrrh are removed, for the healing and encouragement of the faithful. 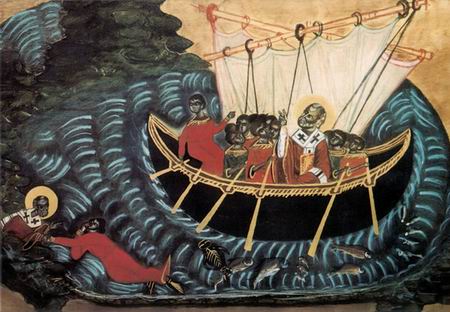