Trials of Dating in College

In the first couple weeks of school, I met a guy that I really enjoyed spending time with. Almost every night we hung out, did something around campus, or just sat and talked. From my perspective, I thought I was meeting a genuinely nice guy with whom maybe I could pursue a relationship with. However, he was thinking something different.
| 16 April 2010 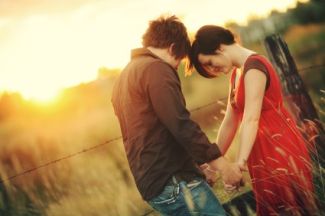 College…a chance to move on from our high school lives and experience new places, challenges, and people. It’s a transition to maturity that is anticipated by almost all high school students. When I moved up to school at UC Santa Barbara, how tough my classes were going to be was not the first thing on my mind: I couldn’t wait to go out to Isla Vista and meet all the hot boys.

For a while, it was fun; going out on the town every Friday and Saturday night (sometimes Wednesdays and Thursdays, too), meeting tons of people (most of whom won’t remember me later because they were so drunk), getting acquainted with my new surroundings. But after the first quarter, it became evident to me: walking up and down the streets of Del Playa on a weekend night is probably not going to be the best place for me to find a lasting, meaningful, healthy relationship.

I won’t deny it, I did meet tons of hot guys going to random house and fraternity parties. But despite their looks, their intentions all seemed to be to get me as drunk as possible so they could take advantage of me later. Granted, not all guys roaming the streets had this intention, but odds are, not many of the guys out on Friday and Saturday nights are looking for a serious relationship. This started to bother me. How am I going to be married by age 23 if I can’t find the guy I’m going to marry soon? I thought to myself.

After about 3 weeks of being away at school, another naivete of mine started to rear its ugly head. In college, guys are not just content with a completely platonic relationship. If you are in a relationship, sex is expected. Not just vaginal sex, but other forms of stimulation are expected. This was something I was definitely NOT okay with. I don’t like to think of myself as a prude, but I was not exactly willing to hop in the sack with some guy just because we are dating and because we are in college. That is just stupid to me.

In the first couple weeks of school, I met a guy that I really enjoyed spending time with. Almost every night we hung out, did something around campus, or just sat and talked. From my perspective, I thought I was meeting a genuinely nice guy with whom maybe I could pursue a relationship with. However, he was thinking something different. One night, he invited me down to watch a movie with him, a seemingly innocent offer, so I accepted. While watching the movie, he started acting strangely and then asked if I wanted to turn on some music. Seeing as we were watching a movie, I was a little confused; but I told him if he wanted to, he was more than welcome to turn some on. I diverted my attention back to the movie. Then he laid down on the bed next to me and after a few moments proceeded to make some advances, ones that I, as an Orthodox Christian, did not want, nor did I see, coming. At that moment, I stopped him and asked him what he was doing. Apparently, by accepting his offer to come down and watch the movie with him, he thought I had agreed to hook up with him that night. Maybe I am just incredibly naпve, but I had never in my life assumed that when I am invited to watch a movie with a guy that there would be some sort of sexual activity going on. Still, as a male college student, he was not looking for a relationship, but just some girl to satisfy his needs.

Seeing as we were friends before this incident happened, I sat with him that night and talked to him about what just happened. Another problem with college guys is that most of them are pretty well educated, so they try to use their intelligence to their advantage. Before I knew it, this guy was trying to convince me that the reason I did not want to do anything with him was because I was insecure and that I did not have enough positive self-esteem to allow myself to have some fun. Needless to say, this upset me enormously. It irritated me that someone, trying to get someone to fool around with them, would try to capitalize on an insecurity that they sensed. Thankfully, I was quite secure with myself and did not fall for his pathetic attempt.

That night really made me mad. It was not so much that he tried to make unwanted advances — that is something that you learn to deal with in college. What really bothered me was that because I was adamant in not having sex with him, I was therefore pinned as insecure and low in self-esteem, when the opposite is true. Standing up for what I believe to someone who I really like and wanted to grow closer to was a hard thing to do. Unfortunately, because I stood up for myself, whatever relationship we had, or were to have, stopped and now we barely ever talk except for an occasional “hi” as we pass each other in the halls of our dorm. For a while, I wasn’t sure if I had made the right decision.

Maybe I should look at his point of view some more; after all, it is college, a time to experiment, right? Then I caught myself. This is exactly what the Devil wants me to think. He implants doubts in my head, little thoughts that question all that I’ve believed my entire life, and leaves them in my head for me to dwell on. After driving myself crazy, I rolled over in my bed and saw my little red Orthodox Prayer Book lying on the refrigerator next to me. All I had to do was open it up and read the incredible first words — “In the Name of the Father, and of the Son, and of the Holy Spirit. Amen.” How could I have even doubted my faith for a second? God has given me so much and has not led me astray; why should I not trust his guidance now?

It is hard for me to believe that what I went through is something that no other Orthodox Christian college freshman goes through in his or her first couple months of school. Nevertheless, in colleges where the percentage of Orthodox Christians is smaller than the percentage of sexually active students, it’s nice to be able to go to church on Sunday and see that I’m surrounded by people who are going through the same things that I am.