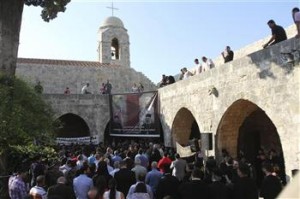 A general view shows people attending a candle-lit vigil at the Balamand Monastery in Koura, near Tripoli, to call for the release of bishops kidnapped in northern Syria two months ago, June 22, 2013. REUTERS/Omar Ibrahim

The Turkish Foreign Ministry has dismissed the claims that two kidnapped Syrian bishops were held in Turkey.

“These claims are totally unrealistic. It is clear that these claims, which we regret, serve some circles’ own interests and aim to leave Turkey in a difficult situation,” the written statement said, referring to some reports that the clergymen were being held inside Turkey.

“It is beneficial to reiterate these facts: Turkey wishes for the bishops to be released as soon as possible and to that end it is making every effort. But, the abduction took place outside Turkey so efforts are limited. Within this framework, Turkey, like many other countries, is making contributions to secure their release.”