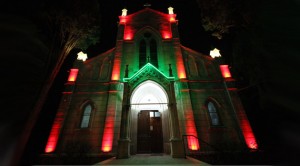 “I do not think that the Christians’ future will be very bright in Turkey.” Yuhanna Aktas, founder of the Assyrian cultural association of Midyat, a city in the southeast of the country, thus shares his worry with regard to the policy of soft Islamization of the society carried out by the government under the AKP party. His association along with a dozen NGOs in Midyat have issued a communiqué in support of the protests, which have been been taking place for the past week in Turkey. The Assyrians (2500 people in Midyat and 18000 in Turkey) make up one of the principle Christian communities in the country, along with the Armenians (almost 70000 people) and the Greeks (2000 people).

If the small city of Midyat has not seen protests, the Assyrians of other cities, notably Antakya and Diarbakr, have participated in what they are calling in Turkey “the Gezi Park Resistance”, after the name of the Istanbul park next to Taksim Square whose planned redevelopment provoked the people’s anger.

“We are seeing in our life the consequences of this government’s policy that excludes those who are not their own,” he states. “Courses on the Quran and the life of Muhammad have been included in school curricula. They are presented as an optional course. But in many schools, other optional courses are not opened under the pretext that there are not enough students. In small towns, Assyrian students are at risk of finding themselves forced to choose Quran courses.” Other problems of the Christian community, such as instruction in their native language or the right to own their monasteries, also remain unresolved.

Also the owner of a wine production facility, Yuhanna Aktas is also nervously following the recently passed resolutions restricting the sale of alcohol in Turkey. “The AKP is in the process of banning alcohol, but is doing so gently,” he believes. “First they banned online sales in 2011. The law that was just passed bans almost every kind of sale at a distance. We cannot even put wines in our window. They must be hidden in a space at the back of the store. They want to tell us gently ‘Close your business.'”

“Anger at a discourse that excludes”

Yuhanna Aktas nevertheless had voted for the AKP in 2002, when Recep Tayyip Erdogan was promising more freedom for all citizens. “There is a phrase that Erdogan often likes to use. ‘We are all brothers in this country: Turks, Kurds, Laz, Arabs, etc…’ But he never includes the Assyrians or the Armenians.” For the Christian entrepreneur, “the current protests reflect anger at a discourse that excludes.”

Members of the Assyrian community in Istanbul are also closely following the developing social movement. “We are not a homogenous community, so there are people who support and who distance themselves from these protests,” explains Rober Koptas, editor-in-chief of Agos, a newspaper published in Armenian and Turkish. “But I’ve seen many young Armenians who were present at the protests, but individually and in the name of their associations.”

For Rober Koptas, whose newspaper “supports the protests”, certain positive steps taken by the AKP, such as a restitution of part of the assets belonging to non-Muslim associations, do not make them “untouchable” in the eyes of the Christians. “We look at things from the perspective of the rights of citizens.”

As for the small Latin-rite Catholic community, which numbers 1500 faithful, they hope that the tensions can be calmed. The parish is situated close to Taksim, the central point for the protests. “We are the minority of minorities in Turkey,” says Mgr Louis-Armel Pelâtre, apostolic vicar of Istanbul. “The Latin-rite Catholics are not participating in the protests, but are following the events nervously.”