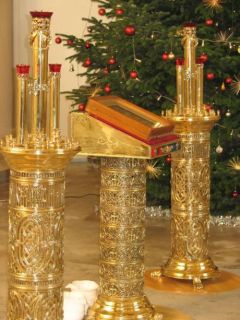 I have a question regarding celebration of Christmas. I am Orthodox, my husband comes from a family with one parent Jewish person and the other Protestant. Their family has always celebrated Christmas on December 25. For the last few years I have joined them, even though I did not feel comfortable and also celebrated it on January 6.

But this year I want to have only one Christmas, the Orthodox one, for the sake of my children who are Orthodox and for myself, but I’m afraid that I will hurt feelings of my husband and his family and cause a split in the family.

Please, tell me if I should insist on having it my way, because I expect a negative reaction.

If one is intent on properly celebrating the feast as an Orthodox Christian — following the Nativity Fast which leads up to the Nativity and observing the feast itself first and foremost through the celebration of the liturgical services appropriate to it — one will acknowledge that it is not possible to celebrate “two” Christmases, a “secular” and “religious” one.

With regard to your specific situation, I would consider the following:

Assuming that you are a member of an Orthodox parish, you should take into consideration the calendar it observes and the liturgical cycle surrounding the celebration of the Nativity. If your parish observes the Revised Julian calendar, which celebrates the feast on December 25, and there is no possibility of celebrating on January 7, then it is difficult, even impossible, to experience a proper Orthodox celebration in January. For Orthodox Christians, the feasts of the Church find their fullest expression in the Divine Liturgy of the feasts, of course with fellowship and social gatherings taking a secondary place in their observance. Here one not only needs to consider the situation of their family, but also the situation of their Christian family, the parish.

Concerning the situation in your family, it would seem that in the spirit of the writings of Saint Paul, one should not provoke others to anger or to place, as he writes in one of his epistles, “any obstacles in their way.” If your parish indeed observes the Julian calendar, thereby allowing you to fully participate in Nativity liturgical services on January 7, you may wish to fully explain the situation to your husband and his non-Orthodox family and seek their understanding in the matter. If being a “no show” at the family dinner becomes a source of division or misunderstanding or the breakdown in the family bond, then it may be best to attend the family gathering while while still fasting and preparing for the Nativity celebration and Liturgy on January 7. If your parish observes the Revised Julian calendar with the Nativity celebration and Liturgy on December 25, then one would be hard pressed to explain how they can properly celebrate the Nativity on January 7 when the liturgical services of the Nativity had been held 13 days earlier. This would be especially true in the case of the liturgical celebration, since January 7 on the Revised Julian calendar is the Feast of the Synaxis of Saint John the Baptist, the day which follows the Great Feast of the Theophany, the Baptism of Our Lord in the Jordan.

Since you did not describe all the details of your particular situation, it is difficult for me to offer further comment. I would advise that you consider the means by which you may remain true to the liturgical observance of the Nativity in church while at the same time not giving cause for misunderstanding or disunity within the family. On a feast such as Nativity, in which Our Lord comes into the world to reunite God and mankind, it would not be appropriate to generate division or enmity, especially if the observance of the Nativity on January 7 does not involve observing the Nativity fast and participating in the liturgical services.

Why are there two days for celebrating Christmas?

Christmas is always celebrated on December 25! But which day is December 25?

The Julian Calendar has a leap year every 4 years. The current secular calendar (Gregorian Calendar) does not have a leap year in those years ending in “00” where the hundreds-part is not divisible by 5 — and thus 1900, 2100, 2200, … are not leap years. In both calendars the year 2000 is a leap year.

The Gregorian Calendar (sometimes called the Revised Julian Calendar) was adopted as the secular calendar in 1585 in parts of Western Europe, in 1753 in England and North America, and 1923 in Russia.

George Washington (1789-1797) was born on February 11 old calendar (i.e., before 1753). That is why his birthday is celebrated on February 22 (“Presidents Day”, new calendar). In his times the difference between the old and new calendars was 11 days.

The two days when Christmas is celebrated drift apart an extra three days every 400 years. December 25 in the Julian Calendar becomes January 8 in the secular (Gregorian Calendar) starting in the year 2100.