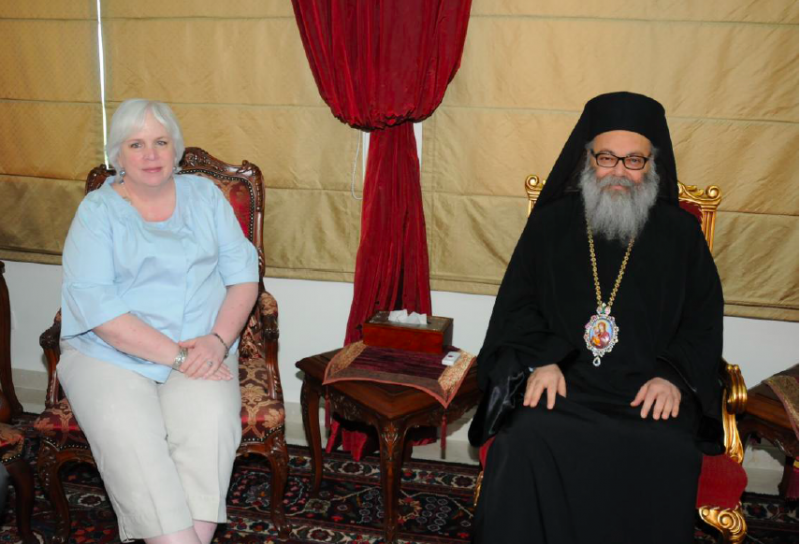 U.S. Ambassador to Lebanon Maura Connelly met with Greek Orthodox Patriarch of Antioch and All the East John X today.

The Ambassador congratulated His Beatitude on his investiture as Patriarch of the Greek Orthodox Church in Antioch and All the East.  She also conveyed Easter greetings to the Patriarch and his ecclesia.

Ambassador Connelly condemned in the strongest terms the kidnapping of the Patriarch’s brother, Archbishop Metropolitan Paul of Aleppo, and Syriac Orthodox Archbishop Mor Gregorios Yohanna Ibrahim of Aleppo, and repeated the United States’ call for their immediate release.

The Ambassador conveyed the United States’ continued support of the Syrian people and underscored the importance of the Geneva communiqué as a basis to realize a peaceful transition through dialogue.  She reaffirmed the United States’ commitment to a democratic and pluralistic Syria that represents and protects the rights of all its people.  Ambassador Connelly stressed the United States’ support for the principle of human and religious rights, including the rights of minorities, and emphasized the important and enduring role Christians continue and must play in the region in concert with other religious groups.

She renewed the commitment of the United States to a stable, sovereign, and independent Lebanon.