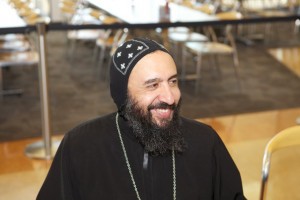 The head of the Coptic Orthodox Church in the UK has called upon Egyptians to work together in rebuilding their nation following the ousting of President Mohamed Morsi.

Bishop Angaelos made the comments in an address to the Church of England General Synod in York today.

He criticised the media for calling Morsi’s ousting a military coup, saying it had been the “right of the people” to express a vote of no confidence in the leadership. The media was also criticised for promoting the idea that Cairo had become a battle zone “but in fact it has not”.

Bishop Angaelos said Egypt had gone from a state of fragmentation under the previous regime to a “completely polarised one” under Morsi, but added that he was hopeful the nation could be rebuilt.

“We are hopeful because we have seen the work of God.  Who would have thought that an Islamist leadership would fall apart in a year and bring the whole country together again?” he said.

Bishop Angaelos went on to speak of the role of Christians in bringing reconciliation to communities, saying: “We’ve got to get away from the model that says that religion brings people apart.  Actually it brings people together.”

He said: “We carry this burden but it is a cross that we carry because it gives glory to God. And I ask for your prayers these days, not feeling sorry for Egypt, but praying for strength and reconciliation and a new heart because what has happened over the last days and weeks has shown people that division will never ever take Egypt anywhere.

“But a consensus, coming together, a unity, a love, a reconciliation from the heart after years of division and divide and conquer, that is the only way ahead.”

In a separate statement released to media on Monday, Bishop Angaelos said efforts towards a new Egypt were “being undermined by needless violence and bloodshed”.

On Monday, 51 Morsi supporters were killed after security forces opened fire on them. The Muslim Brotherhood condemned the “massacre” and has rejected a timetable for new elections by next February proposed by interim president Adly Mansour.

Bishop Angaelos has called Christians in the UK to pray over the next three days for peace, reconciliation and an end to the violence.

“For the good of Egypt, it is imperative that all parties work towards a common future, realising that any lives taken are those of fellow Egyptians,” he said.

“We continue to pray for unity and reconciliation, confident that the spirit that has been developing over the past two years and culminated in June 30 2013 will endure over these vital weeks and months ahead.”