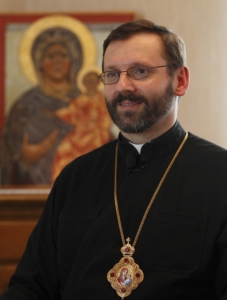 The major archbishop of the Ukrainian Catholic Church said he hopes to follow up a Polish-Russian joint message by pursuing a similar reconciliation process with Russian Orthodox leaders.

“We should also take such a path of reconciliation — without this, it will be impossible to stop Russification in Ukraine and Ukrainophobia in Russia,” said Archbishop Sviatoslav Shevchuk of Kiev-Halych.

“If we somehow try to settle painful questions of the past as Christians in light of the Gospel and to heal our memory solely by means of reconciliation, then we can build something constructive,” he said at a mid-August news conference in Kolomyya.

On Aug. 17, the head of the Russian Orthodox Church and the president of the Polish Catholic bishops’ conference signed a joint message urging Poles and Russians to set aside centuries of anger and prejudice and work together to maintain their countries’ Christian identities.

Archbishop Shevchuk said the declaration had not specified “what Poles forgive the Russians for and what the Orthodox church intends to apologize to the Latin church in Poland for,” but he said the text had provided “a very powerful example.”

Eastern and Latin Catholics make up 10 percent of Ukraine’s population of 50 million, compared to around a third belonging to the country’s three rival Orthodox denominations.

Church ties in Ukraine have long been tense over Orthodox complaints of Catholic proselytism, as well as over the reclaiming of churches by Eastern Catholics.