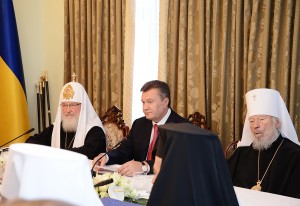 July 27, 2013 – Ukrainian President Victor Yanukovich met with the Primates of Local Orthodox Churches who came to Kiev for the celebrations marking the 1025th anniversary of the Baptism of Rus’.

Greeting the guests, Mr. Yanukovich stressed the need ‘to safeguard the spiritual values which for centuries have been the basis of our identity’ and said that he hoped ‘for your prayers and practical efforts aimed at uniting all those who claim to be Orthodox around the one Cup of Christ’.

He commended the wisdom and well-balanced decisions of Metropolitan Vladimir of Kiev and All Ukraine who ‘has managed to overcome challenges arising before the canonical Ukrainian Orthodoxy’.

The head of the Ukrainian State underscored the importance of Orthodox heritage in Ukraine’s religious life.

With special cordiality he thanked His Holiness Patriarch Kirill of Moscow and All Russia and all the heads of Local Orthodox Churches who participated in the celebrations, for the common prayer they lifted up in the capital of Ukraine on that day.

By a decree of the President of Ukraine, in the acknowledgement of their efforts to assert Orthodoxy in the world, Patriarch Kirill, Patriarch Theodore II of Alexandria and All Africa, Patriarch Theophilos III of Jerusalem and All Palestine, Catholicos-Patriarch Iliya II of All Georgia, Patriarch Irinej of Serbia, Patriarch Neophyte of Bulgaria, Archbishop Chrisostomos of New Justiniana and All Cyprus, Metropolitan Sava of Warsaw and All Poland and Metropolitan Tikhon of America and Canada were awarded the state Order of Jaroslav the Wise, 1st degree.

In his speech in response, Patriarch Kirill thanked the Ukrainian President for the high awards and the opportunity to meet, saying in particular, ‘The event for which we have assembled in Kiev – the adoption of Christian faith by Rus’ – has formed the national self-awareness and culture of our three Slavic nations and has been the decisive factor in all the subsequent history of Ukraine, Russia and Belarus… The fact that the celebrations to mark the Baptism of Rus’ are held on such a high level points not only to the ecclesial but also public and national significance this event has to this day’.

He also underscored the unprecedented scale of the celebrations in Kiev. ‘Never before have the Kievan Hills seen as many as nine Primates of Local Orthodox Churches and representatives of all the Churches, whose Primate could not come for some valid reason, participating in the liturgy. This assembly of the Primates shows the great historic significance the Baptism of Rus’ had 1025 ago. And it shows, of course, the significance of the Ukrainian Church for the world Orthodoxy and speaks of the unconditional support the world Orthodoxy gives to the canonical Orthodoxy in Ukraine’.

Patriarch Theodore of Alexandria who spoke next noted that Kiev, ‘the mother of Russian cities, as the city baptized in the common font of all Eastern Slaves became a bright beacon of grace and knowledge of God for the whole Russia from her remotest borders to northern countries’.

He also addressed Patriarch Kirill underlining that he sincerely loves Ukraine as much as Russia.

On behalf of all the Primates and representatives of Local Orthodox Churches who participated in the celebrations, Patriarch Kirill presented the Ukrainian president with an image of St. Vladimir Equal-to-the-Apostles.