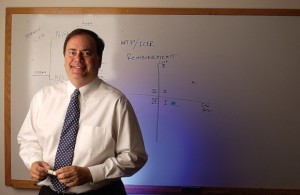 Two years ago, Dr. Frank J. Papatheofanis made a major career move by retiring from his teaching position at UCSD Medical School to fulfill a personal goal: to launch St. Katherine College, an undergraduate college of liberal arts and sciences that integrates Orthodox Christian principles.

It’s the first educational institution of its kind in the nation.

“It’s an idea I’ve incubated for three decades,” he said. “I’m the founder, as well as the president, and also the person who is cutting all the checks.”

Each course of study comes with a heavy emphasis on writing.

“We require our students to take a writing seminar each semester of enrollment from their freshman year to the first semester of their senior year that is taught by a professor of English with an extensive background in writing and teaching,” Papatheofanis said.

“The second semester of their senior year students are required to write a thesis that is an original work. For example, an English major might produce a portfolio of 25 poems or a chemistry major might conduct a new experiment and publish an article about it.”

In the fall new master’s degree programs will be offered in management and leadership of nonprofits, and public health and policy studies.

Instruction began in February 2011, with the college preparing for its first graduating class this spring. Both students have already been accepted to graduate school.

“We started out with 12 students and now we have 40,” Papatheofanis said. “We have 150 applications for the fall so we are on a pretty steep growth trajectory.”

Not only that. The baseball team has already earned a reputation locally by winning 20 games, and losing six, with players being heavily recruited by baseball farm teams, he added. Basketball, women’s volleyball and softball and men’s and women’s soccer teams are in development.

Students from outside of the area are provided private housing in two bedroom, two bath townhomes. All students receive a membership in the Magdalene Ecke YMCA.

The college will hold its second annual President’s Gala, “One World, One Night!” May 18 in the Paddock area at the Del Mar Fairgrounds. All proceeds will go toward scholarships.

Channel 10 News co-anchor Kaushal Patel will serve as the master of ceremonies. California State Sen. Mark Wyland will be the keynote speaker.

“I am honored to keynote St. Katherine College’s inaugural graduation and am confident St. Katherine’s graduates will live up to the school’s vision to increase knowledge that benefits our society, both culturally and economically,” he said.

The gala will begin with a cocktail reception at 5 p.m., and a silent auction at 6 p.m., followed by dinner featuring international cuisine.

The Peter Pupping Band will perform Latin jazz, Nuevo flamenco, contemporary acoustics and jazz standards. The St. Katherine Chorale, which sang the National Anthem at a Padres game last summer, will perform. Cost is $125 per ticket.

Papatheofanis explained that the roots of the Orthodox Christian church can be traced to the Great Schism of 1054 which resulted in the Eastern (Greek) and Western (Latin) branch which later became commonly known as the Eastern Orthodox Church and the Roman Catholic Church, respectively.

“We are unique in that all of our bishops and the clergy can trace ordination to the apostles,” he said.

“We started small but have garnered a lot of interest because the education is top flight, teachers have doctorate degrees from top colleges, classes are small and we are trying to keep the tuition affordable,” Papatheofanis said.

“We would like to have as much of the community join us as at our gala as possible.”

For sponsorship opportunities or other information about the gala visit stkathgala.com. St. Katherine College is located at 681 Encinitas Blvd., Room 201 in Encinitas.

Most viewed articles
The Trap of Religiosity106
Bishop Nicholas of Manhattan visits Holy Cross Monastery in West Virginia84
Lord, Save Me!73
Patriarch Daniel explains why the Hesychasts were the most sought-after spiritual fathers and what is a prayerful reason61
Why Everything Is Important (but not the stuff you might imagine)46
Condolences of Patriarch Kirill over the death of believers in the fire that broke out in Abu-Seifein Church in Cairo44
25 Years of Help: the Ship-Church Goes On its 25th Voyage to Distant Villages42
St. Tikhon Church to host Liturgical Music Symposium in October 202237
Ukrainian Church Celebrates Metropolitan Onuphry’s 8th Anniversary of His Enthronement16
Most popular authors
Pravmir.com team223
Vasileios Stoyiannos106
Fr. Theodore Stylianopoulos73
Aurelian Iftimiu61
Archpriest Stephen Freeman46