It never occurs to us that we might end up outside the Kingdom of Heaven. On the contrary, we think that we will definitely be there, at least somewhere in the 'corner' of heaven. I may not be a great saint, as I say to myself, but I am still a believer, an Orthodox Christian, I go to church, confess my sins, and take communion... How can I not be saved? I never killed, or stolen, or cheated on my wife, or broke laws, what else do I need? I feel like a legitimate saint. I just need to be canonized while I'm still alive.
admin | 10 November 2009 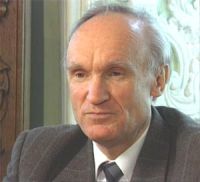 What does a person need to become a saint and why can’t the Church ever recognize someone as a saint while the person is still alive? These questions are the cornerstone of the Christian spiritual life. Aleksei Osipov, professor at the Moscow Spiritual Academy and a renowned theologian, is going to answer these questions.

As we know from the Gospel, the first person who ever entered heaven was the malefactor (Lk 23:39-43), a thief whose hands were covered in blood. This is an amazing fact unparalleled in any other religion of the world. So why was the man saved?

The Gospel is very clear about this. The wrongdoer was saved for realizing that his life was full of filth, for feeling that he wasn’t worthy of being saved, and for his sincere repentance to the Savior. The thief was fully aware and had absolutely no doubt that he couldn’t be where the Man on the Cross was going. That is why he uttered the words, so incredibly humble in his terrible agony, addressing to Christ, “Lord, remember me when thou comest into thy kingdom” (Lk 23:42). He didn’t ask for relief from the pain or for mercy, but he asked the Lord to remember him in the place where he thought he would never be. That’s what was sufficient for being saved. Indeed, as the psalm says, “a broken and a contrite heart, O God, thou wilt not despise” (Ps 51:17). A saint’s life begins with paying attention to one’s own moral life, one’s inner state. One should compare one’s feelings and aspirations with the Gospel commandments, with the way Christ acted. This reveals a whole new world inside a person’s heart, a strange and  an unknown world that often doesn’t look so good.

On the one hand, we are absolutely sure that we are kind, clever, honest, etc. In a word, that we are good and righteous. That is why it never occurs to us that we might end up outside the Kingdom of Heaven. On the contrary, we think that we will definitely be there, at least somewhere in the ‘corner’ of heaven. I may not be a great saint, as I say to myself, but I am still a believer, an Orthodox Christian, I go to church, confess my sins, and take communion… How can I not be saved? I never killed, or stolen, or cheated on my wife, or broke laws, what else do I need? I feel like a legitimate saint. I just need to be canonized while I’m still alive.

But on the other hand, if we pay attention to our words, wishes, feelings, and attitudes towards friends and enemies, and if we compare all this with what our conscience tells us and what the Gospel says, we start seeing things very differently. It turns out I can’t but judge, envy, boast, overeat, etc. There’s so much I can’t but do, that I can’t see myself as a ‘good’ person anymore. Even if I do something good, it is because I’m conceited or calculating. I hear the huge list of sins at the public confession and I realize that 99% of this list are my sins. That is, I see that I fail to keep to the norms laid out in the Gospel.

Can one become a saint while still living? To answer this question we must understand that sainthood is about having the Holy Spirit, a state which may often change throughout a person’s life, for only God knows no change. It’s not a bird which we can catch and lock up in a cage so it can’t escape. But it’s all about watching one’s own “old man,” being vigilant in heart and mind, as if we were defenders of a sieged fortress. If the guards of the fortress are negligent, the whole army may lose. Similarly, there were cases in the history of Christianity when some ascetics achieved the gifts of prophecy or wonder-working, but lost concentration on their thoughts and feelings. As a result, they were no longer able to see their ‘inner enemies,’ and thinking much about their accomplishments so many of these people died spiritually. There were others who never rose in their sainthood above the purity of a child. St. Ignatius (Bryanchaninov) quoted St. Makarius the Great who wrote that there were souls who were given God’s grace, but being spiritually inexperienced, like children, they fell far from the wisdom that is necessary for a true ascetic. In many monasteries such elders were called ‘holy but unskilled,’ and other monks were cautious about consulting them.

Only realizing that we’re unable to defeat our passions and sins by ourselves can we obtain humility. This is the beginning of the right spiritual life. For only this makes us disillusioned with ourselves, revealing the true state of our souls, which is so far from the purity of the Gospel. It makes a person able to look for the Savior, turn to Christ. St. Peter of Damascus said, “The first sign of one’s soul beginning to get well is seeing one’s sins countless like sea sand.” I must repeat that it’s only the beginning of the path to sainthood. But if there’s no beginning, there can be no continuation.