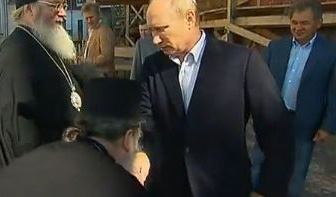 A monk at the Valaam Monastery in northwestern Russia explained why he had kissed Vladimir Putin’s hand during the Russian president’s visit, the monastery’s spokesman Mikhail Shishkov said on Tuesday.

Putin visited the monastery on the Valaam Island in the Russian Republic of Karelia on Monday to hold a meeting of the Russian Geographical Society’s supervisory board. A video by the RT TV channel shows Hegumen Mefody, an aide to the monastery’s head, kissing the Russian leader’s hand, which Putin quickly withdrew. The clip spurred a heated debate in the media and the blogosphere, with some people saying such acts were improper for a priest.

But Shishkov said the gesture of Father Mefody, who is from Macedonia, was as a sign of respect for the Russian nation on behalf of the brotherly Macedonian nation, adding that among priests and laypeople, kissing hands is one of Eastern Orthodox Christianity’s traditions that symbolizes meekness.

“He is a Macedonian; he came to Russia to dedicate himself to serving God. I personally asked Father Mefody: ‘A question is being discussed in the media: why did you kiss the Russian president’s hand?’” Shishkov told RIA Novosti.

“He answered: ‘I kissed the Russian president’s hand as a token of acknowledgement of the great Russian nation by the small [Macedonian] nation,’” Shishkov said.

Shishkov lamented that he had received “many unpleasant calls,” including from journalists, after the incident. “People call me and say: ‘Why do you crawl, why do you behave like sycophants?’ I have not heard such boorishness before.”

“This person is a Macedonian; he filled that action with profound meaning. But [critics] only see the church as an enemy and aggressor. They are not interested in how many people he brought to Christ, how selflessly he works or how hospitably he receives Valaam guests,” the monastery’s spokesman said.

Critics have accused some of the Russian Orthodox Church’s hierarchs, including its head Patriarch Kirill of Moscow and All Russia, of failure to comply with Christian commandments. Church officials have dismissed the accusations. The church has also come under attacks over its support for Putin, who was elected Russian president for a third nonconsecutive term in March and was sworn into office in May.

Shishkov also said Father Mefody apologized to those whom he may have confused when he kissed Putin’s hand.

“As I love the Russian nation very much, this is a manifestation of my Christian love as a representative of a small Slavic nation toward the great Russian nation,” Shishkov quoted Father Mefody as saying. “I apologize to all people I involuntarily confused by that act.”

Father Mefody said he reveres Balkan traditions, one of which is to respect seniors, and added that he had “always kissed the hands” of his parents and grandparents as a sign of love and respect.

The Novy Region news agency quoted Alexander Okunev, a blogger, as saying that his mother knows Father Mefody. He said Mefody became a monk in Russia, and Putin helped him receive Russian citizenship, for which the priest is grateful.