A Greek Orthodox church and an Islamic mosque that sit near each other in Waukegan were vandalized sometime Sunday night, with the same spray-painted “hateful message,” religious leaders announced Tuesday.

At least 10 religious buildings “of all faiths” in the Waukegan area, including in Gurnee, were also tagged with the graffiti, Waukegan Mayor Wayne Motley said at a press conference today. 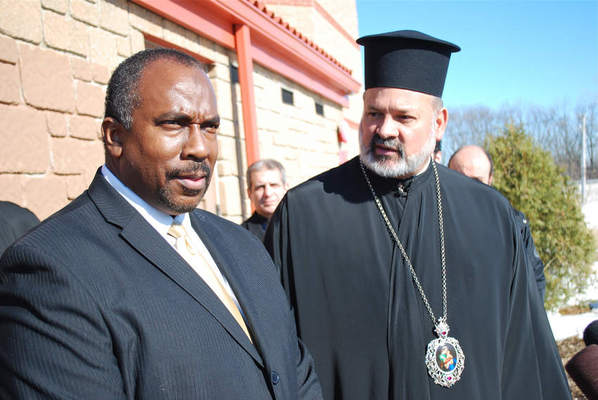 Imam Matthew Ramadan of the Council of Islamic Organizations of Greater Chicago, left, and Bishop Demetrios of the Metropolis of Chicago. | Rick Kambic/Sun-Times Media

He said police are pursuing a number of leads and that the city won’t tolerate such activity.

The Greek Orthodox Metropolis of Chicago released a statement saying: “We are deeply saddened by this act of hate, against not only our faith, but against our Islamic friends. Our St. Demetrios Greek Orthodox Christian Church and the Islamic Foundation North were each the targets of a hate crime. We now stand together united against hate and intolerance.

“Now is the time for love to conquer hate,” the statement continued. “Words written on a wall cannot destroy faith that has lived in the hearts of so many for many centuries. Those who wish to spread hate will be met by love. We condemn these acts of hate against any house of faith and worship. We feel the pain of our neighbors and friends at the Islamic Foundation North. We pray that the forces of love can overcome those who perpetuate hate and intolerance.”

The leaders of St. Demetrios Greek Orthodox Christian Church and Islamic Foundation North scheduled a joint news conference at 1:30 p.m. Wednesday to demonstrate love while “facing the hate together, ” according to a news release. The church, which has a Libertyville mailing address, is located at 1400 N. O’Plaine Road and the mosque is at 1751 S. O’Plaine Rd.

Officials will meet at the Greek church for the news conference, then move to the mosque. Prayers will be said at both locations to show how “the two communities are united against hate,” church spokesman Kevin Lampe said. The vandal spray-painted the same obscene message, along with a smiley face, at both locations, he said.

“What we are all about today is love over hate,” he said.

The vandalism was discovered Monday morning and reported to Waukegan police, Lampe said. The police could not be immediately reached.

When asked if they have any suspects in mind, Lampe said, “We have no ideas.”