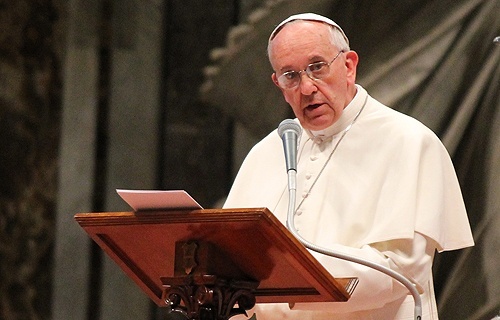 “You Holiness, beloved brother in Christ, this is the first time that I address you on the occasion of the feast of the Apostle Andrew, the first-called. I take this opportunity to assure you of my intention to pursue fraternal relations between the Church of Rome and the Ecumenical Patriarchate,” he wrote on Nov. 30 in the message delivered by Cardinal Kurt Koch, president of the Pontifical Council for Promoting Christian Unity.

Cardinal Koch had led a delegation from the Holy See to Istanbul for the feast of St. Andrew. After taking part in a Liturgy presided over by Patriarch Bartholomew I, the Ecumenical Patriarch of the Eastern Orthodox Church, Cardinal Koch delivered Pope Francis’ message.

“It is for me a source of great reassurance to reflect on the depth and the authenticity of our existing bonds, the fruit of a grace-filled journey along which the Lord has guided our Churches since the historic encounter in Jerusalem between Pope Paul VI and Patriarch Athenagoras,” the Pope’s message said, referencing the momentous event of 1965 in which the leaders of the two churches lifted the excommunications that had been placed on each other in 1054.

Pope Francis explained, “God, the source of all peace and love, has taught us throughout these years to regard one another as members of the same family.”

“For indeed, we have one Lord and Savoir. We belong to him through the gift of the good news of salvation transmitted by the apostles, through the one baptism in the name of the Holy Trinity, and through the holy ministry.”

The Bishop of Rome then reflected on the current state of relationship between the churches and indicated his hope for the future. “United in Christ, therefore, we already experience the joy of authentic brothers in Christ, while yet fully aware of not having reached the goal of full communion.”

“In anticipation of the day in which we will finally take part together in the Eucharistic feast, Christians are duty-bound to prepare to receive this gift of God through prayer, inner conversion, renewal of life and fraternal dialogue.”

Pope Francis also took time to consider the difficulties faced by Christians in the East who are persecuted for their faith.

“The memory of the martyrdom of the apostle Saint Andrew also makes us think of the many Christians of all the Churches and Ecclesial Communities who in many parts of the world experience discrimination and at times pay with their own blood the price of their profession of faith,” he reflected.

“Christians of the East and West must give common witness so that, strengthened by the Spirit of the risen Christ, they may disseminate the message of salvation to the entire world.”

“My thoughts go immediately to our brothers and sisters in Syria, who have been suffering a ‘great tribulation’ for a long time; I pray for the many who have lost their lives and for their loved ones,” he said to those gathered in the Vatican’s Clementine Hall.

“We believe firmly in the strength of prayer and reconciliation,” emphasized Pope Francis.

“For centuries, your church has known how to coexist peacefully with other religions and is called to carry out the task of fraternity in the Middle East.”

Those Eastern Christians who remain in communion with the Catholic Church, such as those of the Melkite tradition, are a “visible sign to all of our Eastern brethren of the desired communion with the Successor of Peter,” he added.

Most viewed articles
The Authenticity of the Vision of Christ in the Life of Saint Silouan120
Epistle of the Council of Bishops of the Russian Orthodox Church Outside of Russia103
Living with Cunning People78
“A New Creation” Through the Cross of the New Adam65
The work of the Church in society is quiet, but full of hope and love, says the Director of Lumina Publications35
Most popular authors
Archimandrite Zacharias Zacharou120
Pravmir.com team103
Fr. Andreas Agathokleous78
Priest Philip LeMasters65
Ștefana Totorcea35