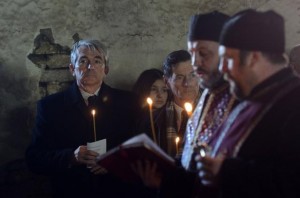 Ambassador Nikowitz (L) is seen during the ceremony

ČURUG — A memorial service was held in the northern Serbian village of Čurug on Friday to honor the victims of a raid against civilians there during WW2.

The residents of the Šajkaška region and the town of Novi Sad were targeted by the Hungarian occupation forces 71 years ago.

Those who attended the memorial service, held inside the Topalov Warehouse – the site where the victims were killed in January 1942 – were later addressed by Hungarian Ambassador to Serbia Oszkar Nikowitz, and adviser to the Serbian president Jasmina Mitrović-Marić.

This was announced by the Racija (Raid) 1942 Memorial Society.

The site should be made a museum of the raid victims in the near future.

Ambassador Nikowitz called for forgiveness and reconciliation and pledged that Hungary would help the efforts to open the museum of the victims as soon as possible.

Mitrović-Marić said the Serbian government would aid in the realization of the project.

The Topalov Warehouse is a building in the center of the village, in which innocent people were brought to be brutally murdered during the raid. Their dead bodies were dumped under the ice of the Tisa River nearby.

Historians say that the raid operations in the southern Bačka region started in Čurug and the town of Žabalj on January 4, 1942, and that the mass killings continued in other places of the Šajkaška region and in Novi Sad from January 21 to 23.

The massive and pre-planned massacre of the civilian population came in retaliation for one of the resistance movement’s operations in the region that ended in the Hungarian occupation troops losing ten soldiers.