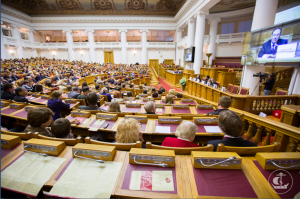 November 3, 2013 – The 7th Russian World Assembly, organized by the Russian World Foundation and the International Association of the Russian Language and Literature Teachers, has been opened in a solemn ceremony at the Tavrichesky Palace in St. Petersburg.

The assembly was declared open by Ms. L. A. Verbitskaya, chair of the Russian World Foundation patrons board and president of St. Petersburg University, and Mr. V. A. Nikonov, chairman of the Russian State Duma education committee.

The event was attended by K. I. Kosachev, director of the Federal Agency for the SIC, Compatriots Living Abroad and International Humanitarian Cooperation, M. E. Shvydkoy, presidential representative for international humanitarian cooperation, V. I. Yakunin, president of the Russian-Railways Company, Mr. Slavenko Terzic, Serbian ambassador to Russia, P. P. Skorospelov, executive director of the Russian World Foundation, and other officials and dignitaries.

The Russian Orthodox Church was represented by Bishop Amvrosy of Petergof, rector of St. Petersburg Theological Academy and Seminary, Archpriest Antony Ilyin, ROC acting representative to the European International Organizations, Archpriest Petr Stepanov, dean of the Bavaria-Hessen district of the diocese of Berlin and Germany, Hieromonk Alexander (Sinyakov), rector of Paris Seminary, Rev. Dionisy Kazantsev, rector of the Parish of St. John the Theologian in Campina das Messoes, Brazil, and Hierodeacon Roman (Kiselev) of the DECR secretariat for the far-abroad countries.

With a blessing of His Holiness Patriarch Kirill of Moscow and All Russia, Bishop Amvrosy read out a message of greeting from the Primate of the Russian Orthodox Church.

The assembly, held in the northern capital of Russia for the second time, is devoted to the theme “The Russian World: Mission of Enlightenment”. The participants will discuss a wide range of humanitarian problems existing in the multinational Russian world, its history and culture as well as prospects for the propagation of the Russian language.

The assembly is the largest-scale event in the work of the Russian World Foundation, which is traditionally timed to the Day of People’s Unity.

The assembly, which will last till November 4, will work in panel discussions, round tables, issue sections, and practical training sessions dealing with the Russian language and culture and the history and philosophy of the Russian World.

Most viewed articles
The Authenticity of the Vision of Christ in the Life of Saint Silouan121
Epistle of the Council of Bishops of the Russian Orthodox Church Outside of Russia104
Living with Cunning People81
“A New Creation” Through the Cross of the New Adam66
The work of the Church in society is quiet, but full of hope and love, says the Director of Lumina Publications36
Most popular authors
Archimandrite Zacharias Zacharou121
Pravmir.com team104
Fr. Andreas Agathokleous81
Priest Philip LeMasters66
Ștefana Totorcea36