Orthodox and Anglican Churches are on different sides of the abyss, says Russian Orthodox leader 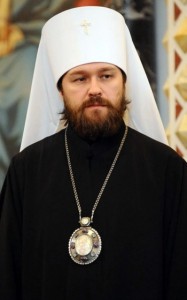 The future of ecumenism is in great peril with the gap widening between orthodox and progressives, says Metropolitan Hilarion of the Russian Orthodox Church a noted theologian and church historian.

Speaking before an audience at Villanova University, a Catholic institution on Philadelphia’s historic mainline and one of the oldest in the US, Hilarion said that when the holy fathers of the first millennium abided in unity and while it was subjected to many serious trials, it was the foundation upon which dialogue between Christians was successful and fruitful. “Fidelity to the Christian tradition is the proper means for the restoration of unity among Christ’s disciples.”

The orthodox leader blasted parts of the Anglican Communion for abandoning the faith and said renunciation of the truth by some Protestant denominations makes it difficult for the Orthodox Church to continue co-operation with them.

“I regret this, but dialogues with Protestants and Anglicans which we have had for decades are now under threat because of processes taking place in the Protestant communities of the West and North. I mean the continuing liberalization in the field of theology, ecclesiology and moral teaching. Certain denominations have legitimized the blessing of same-sex unions and the ordination of people openly declaring their non-traditional sexual orientation.”

Hilarion said he was obliged to speak about this because he wanted to preserve the good that was being achieved during the years of dialogue between Orthodox, on the one hand, and Protestants and Anglicans, on the other. “In defending the two-thousand-year-old tradition of the Church, we remain true to this dialogue, yet at the same time we see that Protestants and Anglicans are growing away from us by accepting innovations which we find unacceptable.

“I am not speaking of this in the walls of a Catholic university because I am afraid to criticize Anglicans and Protestants to their faces. Every time the opportunity arises, I speak openly of our concern in direct dialogue with our brothers from the Anglican and Protestant communities. In 2010 at a festive dinner at the Nicaea Club in London in the presence of the Archbishop of Canterbury Rowan Williams I stated the sad fact that the Orthodox and Anglican Churches are to be found on different sides of the abyss which separate Christians of a traditional direction and Christians adhering to liberal teachings. Recently I spoke of the same things at the old Episcopalian seminary at Nashotah House, a contemporary of your University.”

The Metropolitan added that dialogue with Protestants and Anglicans has reached a dead end, but dialogue with the Roman Catholic Church has a future because, like the Orthodox Church, the Catholic Church does not think of itself as being outside of Tradition and strives to teach and live in accordance with the tradition of the apostles and holy fathers.

“In my view, the significant improvement and strengthening of relations between our Churches that can be seen in recent years is connected to an awareness that we are united by a common heritage, thanks to which both Orthodox and Catholics can and must together bear witness to the world of the eternal values of the Gospel.

“The Orthodox and Catholics encounter the same challenges which modern times lay down to the traditional way of life. In this instance we are dealing not with theological problems but with the present and future of humanity. It is in this sphere that Orthodox and Catholics can interact without compromising their ecclesiastical identity. In other words, while not yet being the one Church, being separated by various theological and ecclesiological problems, we can find ways of interacting which would allow us to respond jointly to the challenges of the modern world.

“Together we can help people realize what the traditional Christian values are – the family, the worth of human life from conception to death, the upbringing of children, the integrity and indissolubility of marriage. All of these concepts in the modern secular world are subjected to a radical re-evaluation.”

Hilarion said that in Western society today, the traditional family way of life has, in effect, been destroyed. As a result, there has been a gradual decline in the populations of Western nations. “This is a very simple and real indication of the spiritual health or spiritual disease of a particular nation. If the population of a country is increasing this means that there are in the nation healthy forces which allow this to happen; if the population decreases, this is a sign of disease.” The disease in society is an absence of the traditional notion of the family, he said.

“At the basis of this worldview there lies the destruction of the traditional family way of life. If we speak of Christian communities, the traditional way of life of the family is preached only by the Orthodox and Catholic Churches. At the official level it is the Orthodox and Catholic Churches which defend the integrity of marriage, believe abortion to be a sin and call for an end to it, and believe that euthanasia is unacceptable.”

Hilarion continued, “The ‘Foundations of the Social Concept of the Russian Orthodox Church’ with the Catechism of the Catholic Church which outlines the official teaching of the Catholic Church on these problems, then everywhere you will see that their positions are similar. This means that we can combine our endeavors in order to jointly protect traditional values such as the family, giving birth, how children are brought up and the integrity of marriage. This is the field where we can and must today interact with Catholics.

“In this regard, I am convinced that co-operation of all Christian confessions, and first of all between the Orthodox and Catholic Churches, is greatly needed for the protection of human life and its inalienable dignity as well as the family. Therefore we who are united by faith in Christ and a two-thousand-year-old Christian tradition have to bring with renewed strength the good news to the world of the family and marriage as institutions created by God.

“In accepting the challenge of the real world, the Christian family is to be as before the hope and pledge of a Christian civilization. It is essential to protect and support a cultural tradition which is favorable to the family, the indissolubility of marriage and the need for marital fidelity by taking an active part in the creation of legislation that favors the family and its natural foundation and by imparting to society the ideals of the majesty and perfection of the family vocation.”

The Orthodox leader said that protecting of Christians from discrimination is another area of cooperation between the Orthodox and Catholics.

“Unfortunately, in the countries of the so called Arab Spring, as well as in a number of other countries of the Middle East, Africa, Asia and Oceania, Christians are subjected to discrimination, persecution and repression.

The media ignores the problem of religious persecution. “In planning military intervention in a particular country of the Arab world or in preparing the overthrow of the existing regime in a particular country with the help of outside forces, Western strategists completely fail to take into account the fact that the main victims are often local Christians.”

Hilarion cited several examples. “In Iraq only one tenth of a million-and-a-half Christians that lived there ten years ago have survived. In Egypt we are witnessing a mass exodus of Christians. There are practically no Christians left in Libya. Ninety five percent of Christians have abandoned homes in Syria. We, Orthodox and Catholics, must raise our voices jointly in defense of Christians subjected to persecution and repression in these countries, as well as in Afghanistan, Pakistan, India, Indonesia, the Philippines, Nigeria and in a number of other countries as well.

“The countries of Europe have traditionally defended the interests of Christians in the Middle East and in Eastern Asia. In the present circumstances we hope that the resolution adopted by the European Parliament on January 2011 on the position of Christians in the context of religious freedom, as well as the declaration of the Committee of Foreign Ministers of the European Union on 22 February, will have practical consequences. They were a result of active participation by the Christian Churches in this direction. We hope that the USA will join us in the defense of Christians.

“Today Christians are subjected to harassment not only in those countries where they comprise a minority but often in those countries with ancient and deep-rooted Christian traditions. Certain European countries are trying to limit the manifestation of Christian faith in public life by claiming that they are thereby observing the rights of adherents of other religions and atheists. This situation demands that Orthodox and Catholic show solidarity in their actions in protecting the Christian identity of Europe and America.

“The Christian communities of Syria and other Middle Eastern countries are crying out for help at a time when the Western media ignore their pleas for aid. Politicians too are closing their eyes to this unprecedented wave of persecution. We, the Orthodox and Catholics from around the world, have to raise our voice in defense of Christians and the Christian traditions of the Middle East. It is our duty to appeal constantly to political leaders, international organizations and the media by reminding them of this humanitarian tragedy unfolding before our eyes.”

Hilarion observed that it is essential for Orthodox and Catholics today to perceive each other not as rivals but as allies in the cause of the defense of Christians’ rights. “We must develop interaction outside of the success or otherwise of theological dialogue, independent even of how relations between the Orthodox and Catholics take shape in concrete regions around the world. We must build this interaction from a common strategic task since we are dealing with the future of humanity. It is upon our joint endeavors that the future of Christianity in the third millennium will primarily depend.”

Note from Pravmir: Although this article appeared online on January 12, 2013, the remarks of His Eminence are taken from a lecture he delivered at Villanova University on October 31, 2012.