When you visit a nation that has been bombed and dismantled by your own country, you don't expect to be greeted with flowers. I feared that at least one Serb might deliberately do something to make me feel, shall we say, "uncomfortable." I ended up being right, but at the same time very wrong.
Priest Barnabas Powell | 23 June 2010

A few years back, my wife and father-in-law took me on a trip to Serbia. I was excited to see where their ancestors came from, but the prospect still made me nervous.

When you visit a nation that has been bombed and dismantled by your own country, you don’t expect to be greeted with flowers.

I feared that at least one Serb might deliberately do something to make me feel, shall we say, “uncomfortable.”

I ended up being right, but at the same time very wrong.

One afternoon we decided to visit a 13th-century monastery called Crna Reka (“Black River”), located on a mountaintop near the border between Serbia proper and its southern province of Kosovo. 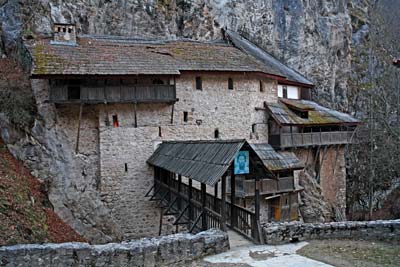 As the grade became impassably steep, our Yugo gave up and we had to walk.

Responding to a call of nature, I took one step into the brush and immediately sank ankle-deep into a mudhole.

The result of my accident was doubly embarrassing insofar as only one foot was caked in filth. I was tempted to sink the other one in just to match.

When we made it to the monastery, and sat on a bench to catch our breaths, our attention was absorbed by the figure of a monk who zipped from place to place performing his chores.

His cassock snapped with each stride. A warm smile was written on his face. He couldn’t have been a year past 30. As he darted past on one errand, he noticed my lamentable foot, which I tried to hide with an embarrassed grin.

I’d scraped it off as best I could with a stick, but it was still caked in what had become pale, brown clay.

Pointing to this, he said in Serbian, “You can wash at the spring.”

Gathering from the subsequent translation that I was an Anglophone, he grabbed my wrist and whisked me down a path.

When we arrived at the spring, I started to thank him, assuming he would leave me to clean myself in peace. Now that we were alone, however, this Serbian monk gave me the most humiliating experience of my life.

Before I knew what hit me, he fell to his knees, took a brush in his hands and started to wash my foot. I was paralyzed with shock, to put it mildly. My instinctive reaction was to grab him by the shoulders and say, “You should not wash my feet!”

Have you ever shaken your head at any of St. Peter’s blunders, such as when he earns a rebuke for saying these exact words to Jesus?

Don’t presume. You would feel just like Peter and I did.

When I recovered my wits sufficiently to react, I knelt down to his eye level and said, “Hvala” (“Thank you”).

Then I motioned for him to hand me the brush, which, after a moment’s hesitation, he reluctantly surrendered.

As he did so, he looked at me with his gentle smile and said, “Thanks is God.” I didn’t understand what he meant at first, but then I got it.

“Hvala Bogu,” I complied, still stunned by what had just transpired.

I opened my mouth and attempted to make idle conversation, but he would have none of it. Hopping up and bowing, he darted back to the monastery and his chores. I didn’t even get his name.

Serbs recently marked the 10th anniversary of the NATO bombardment that tore away the ancient heartland of their nation.

Since that time, most of Kosovo’s Serbian and other non-Albanian minority have been driven out, and Albanian extremists have destroyed more than 150 Orthodox churches and monasteries.

In spite of this legacy, the most mortifying act I as a Westerner was subjected to was the one perpetrated by this monk.

Some would have us believe the Serbs are a cruel people. I never met anyone fitting this description.