We call upon all parties to show humaneness and mercy

On 26 January 2014, His Beatitude Patriarch John X of Great Antioch and All the East and His Holiness Patriarch Kirill of Moscow and All Russia made a joint statement addressed to the participants in the Geneva II International Conference on Syria. Taking part in the Conference are representatives of the opposing parties and the world community. The text of the Statement is given below. 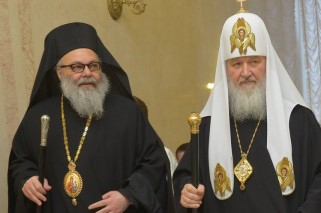 We, Primates of fraternal Orthodox Churches, the Church of Antioch and the Russian Church, met in Moscow in order to once again bear witness to love in Christ, the love which our Churches have preserved intact through centuries and which is addressed to all people regardless their nationality, religion or political views.

Today our common prayers go to the long-suffering Syrian people undergoing unprecedented ordeals. The land, in which Muslims and Christians have lived together for centuries, has been filled with tears of those who are lamenting the death of their relatives and friends and who have beendriven away from their homes. The calamity that has come to the oncepeaceful landspares neither old peoplenor children, neither Muslims nor Christians. No heart can remain indifferent to the horrible tragedy in Syria.

These days, Switzerland is hosting an international conference which gathered at the negotiating table representatives of the opposing parties and the worldcommunity. We address our ardent appeal to the participants in the meeting, asking them to exert every possible effort to end the bloodshed and restore peace in the blessed Syrian land.

We call upon the participants in the Geneva II International Conference on Syria to oppose any manifestation of extremism in order to put an end to the intolerance and the policy of ultimatums. It is only fraternal and free dialogue within the Syrian society that can open up the way to a peaceful settlement.

Once again, we appeal for the immediate release of the Christianswho have been taken hostage in the armed conflict. Metropolitans Paul and Youhanna Ibrahim, Christian hierarchs from Aleppo, have been held captive for many months now. For over a month, sisters of the Convent of St Thecla in ancient Maaloula have been held hostage as well. We call upon all parties to show humaneness and mercy as an evidence of their intention to follow the way of re-establishing peace and prosperity in Syria.

The scale of the disaster makes us, Primates of the two Orthodox Churches, appeal to all people of good will and ask them to help those who are suffering in refugee camps or facing destitution after losing their homes and livelihood.

It is necessaryto stop the destruction of priceless cultural and religious heritage sites that the Syrian land is so rich in. Their destruction is a crime against future generations.

We believe that the All-Merciful Lord will show His mercy to the people of Syria and will strengthen and bless those who are striving to restore peace and prosperity in this ancient and holy land.