What’s in a name? Sometimes, encouragement

When my priest advised me, a few months before my conversion, to choose a patron, I asked for a complete list of every saint with a brief description. He suggested I reread my Bible and pick someone from its pages who struck me as a model. I eventually narrowed the choice to three: Philip (with his evangelical response to the Ethiopian eunuch), Stephen (the first martyr), and Barnabas (who introduced the former persecutor Paul to the other apostles). This act of peacemaking, accompanied by his missionary zeal, ultimately compelled my choice.
Priest Barnabas Powell | 06 July 2009 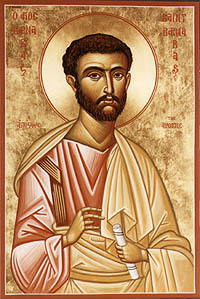 Mama didn’t name me Barnabas. In fact, no one in my family ever heard the name until I chose it myself.

Orthodox custom from ancient times has been to name our children after saints. That saint becomes the child’s patron, praying for their soul.

When an adult joins the church, they choose their own saint. If they already have a saint’s name, they’re encouraged to take that saint as their patron.

In my case, there was no saint Brad. I never understood how I got that name. There wasn’t any family precedent.

I researched in vain for “Great Brads of History.” “Brad” never really felt like me, nor did it bestow much to live up to. When my priest advised me, a few months before my conversion, to choose a patron, I asked for a complete list of every saint with a brief description.

He suggested I reread my Bible and pick someone from its pages who struck me as a model.

I eventually narrowed the choice to three: Philip (with his evangelical response to the Ethiopian eunuch), Stephen (the first martyr), and Barnabas (who introduced the former persecutor Paul to the other apostles). This act of peacemaking, accompanied by his missionary zeal, ultimately compelled my choice.

In choosing a patron saint, I also chose a particular understanding of ecclesiology (the branch of theology dealing with the nature of the church).

The church is far more than an organization whose membership consists of the Christians currently respirating. It is a communion of both the living and the departed.

Just as we pray for one another here on Earth, so that relationship continues after death. Orthodox Christians pray for the departed not only at their funerals, but on many occasions throughout the year.

Likewise, the departed may pray for us, and we recognize certain of them as being particularly worthy of asking for prayers.

Their designation as saints is not a matter of ecclesiastical fiat, but a recognition of veneration already taking place. A saint is someone so holy we keep asking them to pray for us even after they pass from this life.

Visitors to an Orthodox temple will notice walls covered with icons: images of Christ, Mary and the saints. Icons remind us that whenever we gather as a church, the faithful of all times and places gather with us.

Biological death is a meaningless condition for determining church membership. The Apostle Barnabas is as “alive” as I am, probably more so than I ever will be.

I ask him to pray for me with as much hope as I ask anyone else.

Saint Barnabas not only prays for me, he serves as my role model. Role-playing games like Dungeons and Dragons let you assume a fictional persona as a means of retreating from reality for a few hours on a Friday night. At best, this is harmless.

Having a patron saint is quite the opposite of this escapism. We don’t play at sainthood. We seek it as life’s only worthwhile pursuit.

Salvation is not an event, but a process. It’s not that I’m saved, it’s that I’m being saved. The saints inspire us to pursue Christ, since they have succeeded in doing so despite the odds.

Earlier this month, I celebrated St. Barnabas’ annual feast day. As I listened to the appointed hymns and scripture readings, I was struck – even embarrassed – by how little resemblance I bear to this man whom Acts describes as “a good man, full of the Holy Spirit and of faith.”

His original name was Joseph. “Barnabas” (son of encouragement) was added on in recognition of his chief virtue of comforting men’s souls.

It would be ridiculous for me to compare myself to such a man, if this comparison were for anything other than my own encouragement to be a better person.

If Joseph could become Barnabas, let’s hope Brad can, too.

Barnabas Powell is pastor at St. Michael’s Orthodox Church. He may be reached at barnabaspowell@yahoo.com.