When a Letter of Congratulations Contains a Warning… 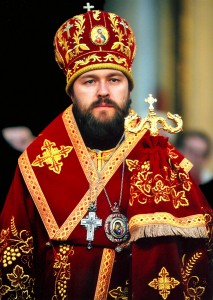 The Metropolitan of Volokolamsk, Chairman of the Department of External Church Relations for the Russian Orthodox Church, and a permanent member of the Holy Synod of the Patriarchate of Moscow, Bishop Hilarion of Volokolamsk, has written a letter of congratulations to Right Reverend Justin Welby, Bishop of Durham and nominee as Archbishop of Canterbury.

I would like to extend to you wholehearted congratulations on your election as Head of one of the oldest episcopal chairs founded by St. Augustine of Canterbury in the 7th century.

You have been entrusted with the spiritual guidance of the entire Anglican Communion, a unique union of like-minded people, which, however diverse the forms of its existence in the world may be, needs one ‘steward of God’ (Tit. 1:7) the guardian of the faith and witness to the Truth (cf. Jn. 18:37).

The Russian Orthodox Church and the Churches of the Anglican Communion are bonded by age-old friendly relations initiated in the 15th century. For centuries, our Churches would preserve good and truly brotherly relations encouraged both by frequent mutual visits and established theological dialogue and certainly by a spirit of respect and love which used to accompany the meetings of our hierarchs, clergy and ordinary believers.

Regrettably, the late 20th century and the beginning of the third millennium have brought tangible difficulties in relations between the Russian Orthodox Church and the Churches of the Anglican Communion. The introduction female priesthood and now episcopate, the blessing of same-sex ‘unions’ and ‘marriages’, the ordination of homosexuals as pastors and bishops – all these innovations are seen by the Orthodox as deviations from the tradition of the Early Church, which increasingly estrange Anglicanism from the Orthodox Church and contribute to a further division of Christendom as a whole.

We hope that the voice of the Orthodox Church will be heard by the Church of England and Churches of the Anglican Communion, and good fraternal relationships between us will revive.

I wish you God’s help in your important work.

“Congratulations” might not be the best word to describe the entire contents of Bishop Hilarion’s letter.

“Innovations,” “deviations,” “increasingly estrange,” “further contribute to a further division of Christendom,” and “good fraternal relationships between us will revive” sound more like a “warning” to the new Archbishop of Canterbury: His denomination is falling off a moral cliff.

Bishop Hilarion doesn’t mince his words when it comes to the orthodox Christian faith, does he?

Imagine what the National Catholic Reporter would have to say if the USCCB or a U.S. metropolitan archbishop sent  the new Archbishop of Canterbury a similar letter of congratulations!