Where the Line between Good and Evil Lies 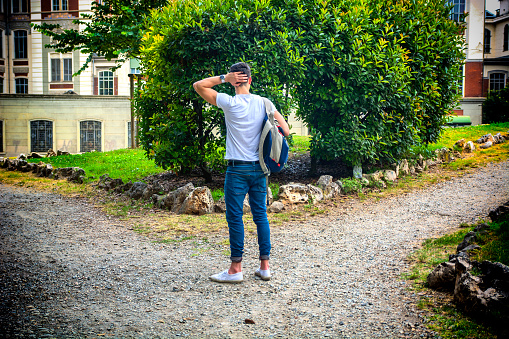 I was fourteen when the Korean War ended, too young to serve but not too young to know neighborhood guys who did.  We played baseball together in the schoolyard.

We didn’t call it a war.  It was a “police action.”  The TV series MASH ended in 1983, thirty years ago and thirty years after the war was over.  The Korean War never really ended.  A shaky truce has endured for sixty years, but no peace settlement.  Korea has been divided since the end of World War II.

The sixtieth anniversary of the truce passed unceremoniously, true to its label, “the forgotten war,” but I thought about the divided era of the Cold War.

My buddy Jimmy lived a good bicycle ride away, and I sometimes stayed overnight at his house.  His parents didn’t seem to mind, and neither did mine.  Jimmy had an attic room.  You could stand in the middle only, because the roofline slanted low to the sides his Dad paneled to make a bedroom.  It was hot in the springtime.  We hung out up there, carrying on philosophical conversations and talking about capitalism and communism and the cold war.

When we felt brave, Jimmy would haul out his .22 rifle, check to make double sure it was empty, and in the quiet of his room we practiced what to do if the Commies streamed into the Philadelphia docks.  It was childish, and slightly dangerous, but we would point that rifle at each other in the late afternoon and ask in a gruff voice, “Christian or Communist?”  True to form we answered, “Christian” and heard the click of the hammer fall on an empty chamber.

Those were exceedingly serious times.  School children learned to “duck and cover” under metal desks with hinged wooden lids and inkwells.  Guys not far past teen age came home in khaki with distant looks in their eyes.  Some of them came home in government issued coffins.

The world divided over the struggle for the souls of mankind.  On one side was all that was holy, precious, and good and on the other the devil prowled like a lion seeking whom he might devour.   Joe Stalin had just died and Khrushchev promised that the USSR would stay the course.  Hollywood served up the events of the day in gritty Sci-Fi flicks.   They didn’t fool us and didn’t try; we knew those monsters were disguised Commies.  Propaganda was everywhere.

In 1989 I heard a friend’s excited voice on a crackly telephone say, “Der Mauer ist los!”  “The Wall is down,” and just like that everyone stopped believing the myth.  When the people stopped believing in it, the wall came crashing down first in their minds and then in rubble.  The Cold War symbol was gone.

That was a quarter century ago.  The median age in America is now thirty-five.  Most Americans were children or unborn when Communism ended, and they have no memory of it.  No more rifles in attic rooms testing our mettle.  Have we learned anything new?

We separated the world into good guys and bad guys.  America fed that belief.  We had our own myths.  Correctly did Alexander Solzhenitsyn write in The Gulag Archipelago: “…the line separating good and evil passes not through states, nor between classes, nor between political parties either – but right through every human heart – and through all human hearts. …I have come to understand the truth of all the religions of the world: They struggle with the evil inside a human being (inside every human being).  It is impossible to expel evil from the world in its entirety, but it is possible to constrict it within each person.”   That possibility is the real reason to move beyond those simple choices of good versus evil – for all of us.