My problem is that if you consciously chose not to have anything to do with the Church during your lifetime then burying you from the Church makes you into a hypocrite, which I don’t want to do. If I decide to bury you for a stipend, or just in order not to “make waves” in the community, I’m then a hypocrite. And if hypocritical priests bury hypocritical laymen it certainly makes the Church appear hypocritical, doesn’t it?
Fr. Bohdan Hladio | 20 April 2010

I know your name, I know your family, but I don’t know you. The phone call I got about you was the one I dread. “Father, so and so has passed away, and the family wants to know when you can serve the funeral”

What am I supposed to do? I’ve been in this parish long enough to have seen and met anyone who has even the slightest connection with our community. I’ve never seen you in Church. I’ve never spoken with you. I’ve never noticed you at a Panakhyda, a wedding, a baptism, or a funeral. Where have you been?

Were you a believer? If you were a believer, you certainly didn’t act like one. What I mean is that there has always been a clear set of expectations set before anyone who wishes to call themselves a Christian. Christians approach Holy Confession and Holy Communion at least once a year, for example. You didn’t. Christians support the Church with their time, money, and talents. You didn’t. Christians attend Divine Services regularly. You, to my knowledge, and to the knowledge of everyone I’ve talked to, haven’t darkened the door of our church in years.

From what I’ve been told you were rather successful at what you did. You obviously spent lots of time learning career skills, spent lots of time working and making money. From your address I see that you certainly were well off financially. But even this confuses me, because our parish keeps records of everyone who donates even the smallest amount of money, and I’ve never seen your name there. You had money for the government. You had money for food. You had money for shelter, for vacations, for a cottage, for concerts, and for restaurants. Yet now that you’re dead it’s the Church, the same Church you didn’t support when you had the chance, that gets asked to bury you. “But he was baptized here”, they tell me. Sometimes I think the sectarians are right, and we should wait until people reach the age of reason so that they might consciously accept baptism, with all its consequences and responsibilities. The fact that you were baptized here simply underlines the fact that someone failed — perhaps your family, perhaps our community, perhaps you yourself — in your Christian upbringing and development. If you hadn’t been baptized you (and your parents and godparents) would at least have an excuse for your conduct. 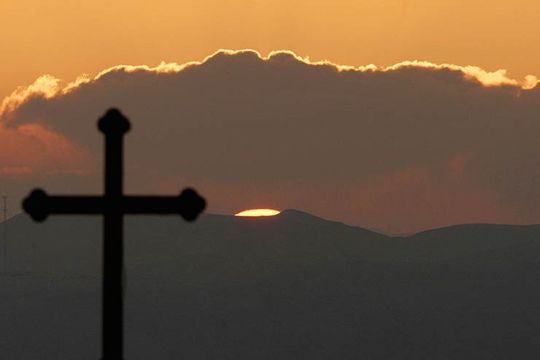 At times like this I just want to go on vacation, and let a substitute priest deal with things, because not knowing the situation at least he won’t have qualms of conscience. Did you believe in God, or did you mock God? Were you positively disposed to the Church and Her teachings, or did you actively support social and moral teachings such as access to abortion which are anti-Christian? Not knowing these things, I don’t know if it’s proper to bury you. A Christian burial is for Christians. Were you? The Church always gives the benefit of the doubt, but we’ve got to base that benefit on something. So far, I’m drawing a blank.

What do I say to your family? They are distressed and heartbroken. All of us realize that death is just around the corner, that a weak heart, a drunk driver, or any of a myriad of other causes can snuff out our life even as we feel ourselves to be young, healthy, and in control of our destiny. Your sudden death, not having time to say even a simple “good-bye, I love you” has devastated them. I hope there were no unresolved conflicts, because in a case like this it makes those left behind even more distraught, and sometimes those wounds never heal.

The one thing I can say for sure is that you do have a few devout relatives, people who truly love God and serve Him in any way they can. While most of your friends and family would be only mildly upset if I didn’t bury you. (I actually think they’d be happier. A “rent-preacher” service would be shorter and more easily forgotten, and afterwards they’d have the satisfaction of complaining about how the priest was “unfair” or “judgmental” and feel justified in not having anything to do with the Church. Until they wanted a nice wedding. Or to baptize their child. Or died). It’s these pious relatives who are foremost in my mind as I consider what to do.

But as the saying goes, “God has children, but no grandchildren”. It doesn’t matter whether our parents or aunts or uncles are saintly, or priests, or bishops, or whatever, it’s what we ourselves do with the time, talents and material wealth which God has given to us which will either open or lock the gates of Heaven for us. If we don’t want to be saved even God Himself can’t force us (and God can do anything!).

The bottom line, you see, is that I don’t feel comfortable making either you, or me, or the Church into a hypocrite. Jesus preached love, but He also preached truth and responsibility. He accepted the worst sinners who repented, but he condemned everyone (the “church people” first and foremost!) who was hypocritical. So you see, my problem is not that you were a sinner. I’m a sinner too. My problem is that if you consciously chose not to have anything to do with the Church during your lifetime then burying you from the Church makes you into a hypocrite, which I don’t want to do. If I decide to bury you for a stipend, or just in order not to “make waves” in the community, I’m then a hypocrite. And if hypocritical priests bury hypocritical laymen it certainly makes the Church appear hypocritical, doesn’t it?

“But the Church is full of hypocritical people”, you might say. You’re right, and again, I’m one of them. I personally would rather deal with an honest agnostic than a nominal believer. But the very fact that someone is willing to give God the “benefit of the doubt” (if not real faith) by paying their parish membership, by being well disposed towards the Church, by showing up for the occasional religious or cultural or social gathering really does mean something. We are taught that when we take one step towards God, He comes running toward us (you may have heard the story of the prodigal son. It’s been on the best seller list for a long time). At this moment I’d really like to learn about any conscious step you may have taken in your adult life towards God. I’m not having much luck.

So I don’t know what to do. I don’t know whether giving you a Christian burial will be for God’s glory, or compromise the Church’s authority and discipline. We all know that a funeral has absolutely nothing to do with whether we go to heaven or not. Many saints didn’t receive a Christian burial, but are in heaven. Others, who were buried with great pomp and ceremony but had grave, unrepented sins weren’t helped by their funerals, because repenting is one of the few things only we can do for ourselves. In any other sphere of life a different set of  expectations is in place — if I’m not in the army, for example, and ask for a military funeral the officer at the local base will not only deny my request, he’ll think that I’m crazy. But the Church, is, well, supposed to be different!

“But Father, the funeral is for the living”. If I hear this nonsense one more time I think I’m going to be sick. I’ve never heard of a funeral being served for someone who was alive. Orthodox Christians believe that prayers for the dead can be beneficial. We don’t believe in “closed casket” funerals, or worse yet, funerals without a corpse. Yes, a funeral, piously served and chanted, with a proper sermon, can bring great comfort to the grieving and spiritual edification (sometimes even enlightenment) to those present. But it’s my experience that people “write their own eulogy”. In cases like yours lying won’t do, and telling the truth might not be terribly comfortable.

So forgive me. If I was wiser, and more compassionate, and holier, I’d know what to do, what to say. But I don’t. Am I going to serve the funeral? I don’t know yet. The only thing I know for sure is that at this moment I hope and pray with all my heart that your current dilemma is less traumatic than mine. But somehow I doubt it.