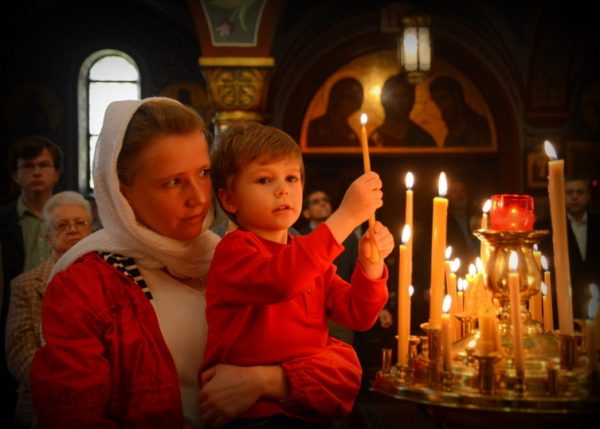 Today’s lesson from St. John’s Gospel provides us a glimpse of the Church immediately following Christ’s Passion and Resurrection. This was a very precarious time for the young Church of Christ.  Just a few days ago, their Leader was hailed as the Deliverance of Israel, the Son of David Who would inaugurate a great revival for the Jewish people.  The foreign occupiers would be overthrown, and the Rightful Heir would once again rule over God’s people.  The triumphant entry of Jesus and His disciples into the old capital city of Jerusalem proved that the words of the prophets were being fulfilled, and a King from the House of David would once again rule the people of Israel, with the blessings of God.

But what a difference a week can make!

Now we find Christ’s band of followers huddled behind locked doors, hiding and in fear for their lives.  The crowds that were at first cheering Jesus, quickly became His persecutors, calling for His crucifixion and the release of the notorious criminal, Barabbas.  Jesus’ disciples went from debating amongst themselves who will have power and authority in His earthly kingdom (Mark 10:37), to abandoning their teacher as He hung on the cross in agony and humiliation.  These were certainly dark times for Christ’s infant Church.  It would take the presence of Jesus over the next 40 days, and the Decent of the Holy Spirit on Pentecost, to move them from behind locked doors, to publicly preaching and proclaiming salvation through God’s Only Begotten Son.

Seeing was indeed believing!  It was not until Jesus appeared amongst them in the flesh—walking, talking and eating— where their eyes finally opened, and they were able to comprehend all the things they had been taught and experienced over the previous three years.  But for now, they were just a band of rejected and dejected followers of a dead and humiliated messiah, a usurper to the throne of Caesar.

We today cannot even image what it must have felt like to see Jesus suddenly appear before the disciples at the lowest point in their lives.  I would have to believe that St. Thomas’ comment, about needing physical evidence before he would accept the Resurrection of Jesus, was most likely shared by the rest of the disciples as well.  Up to that point, all they had was an empty tomb and Mary Magdalene’s claim of seeing, touching and speaking with the risen Lord.  But that scant evidence was hardly enough to risk persecution by proclaiming a Resurrected Messiah, when One was not in sight.  And so, they hid.  Christ is Risen—so now what?

For many of us today, the lull following Pascha seems almost unreal.  After more than a month of services and fasting in preparation and anticipation of Christianity’s holiest day, we too may feel a sense of loss.  Nothing matches the intensity of the Church activities leading up the Pascha Sunday Liturgy, making everything afterwards seem almost anticlimactic.  It just feels wrong not to be in a Church service or two for every night of the week!  So, we may want to ask as well: Christ is risen—so what are we to do now?

Is it possible to experience that same feeling of fatigue and emptiness that we get after the Christmas holiday rush, where all we want to do is pass out immediately after the gifts have been opened and the leftovers shoved into the refrigerator?  Maybe the anticipation of the holiday means more than the actual meaning of the holiday itself.  Could it be that we are not much different than Christ’s disciples, experiencing that same “what’s next” feeling, when the real question should be, “how do we reclaim that joy of being in the presence of Jesus?”

We should understand that Pascha is not the end of the journey.  While representing the fulfillment of the Old and New Testament prophesies, Christ’ Passion and Resurrection should be understood as a mid-way point; neither a beginning nor an end.  There are still many more pages left in the script of the salvation of the world, so it’s too early to stop now.  We have our own timeline which is bound by our birth and our death, but God’s timing is entirely different; He does not run on our personal timetable.  So, for all of us here, the marathon continues.

It is important to keep in mind the central purpose for the Lord’s passion and resurrection.  In the Western understanding, Jesus had to die to pay the debt of sin owed to God by humanity.  Only a sacred sacrifice would appease an angry God, and therefore His Son was the only offering that would prove worthy.  But in our Orthodox understanding, Jesus’ death had a much different purpose than simple appeasement.  Through death, Christ was able to enter the realm of the dead, destroying the bonds that held humanity captive since the time of Adam and Eve. His resurrection points the way to our resurrection as well, because we can no longer be held in Death’s grip of fear. The last paragraph of St. John Chrysostom’s Paschal homily, which we hear during each Paschal Liturgy, sums up the purpose of Christ’s passion and resurrection:

Death and its reign was ended through Christ’s obedient sacrifice upon the cross! His victory is our victory!  The gates of Paradise have been re-opened, not just on Pascha Sunday, but every day, for all eternity.  When we proclaim that “Christ is risen” we are also saying, “The power of death has been destroyed.”  The one common denominator of all creation throughout the world, death, has met its match in Jesus Christ.

If we find ourselves missing that “Paschal feeling,” then maybe we could start by asking exactly what it is that we are missing?  There is no rule that says we must stop doing all the things that we have been doing during Great Lent and Holy Week.  Nothing says that we must stop fasting or decrease our prayers.  And yes, we can still perform acts of charity, even though Great Lent is over for this year.  While there are not as many services being held at the church building, it is possible to have “church” in our own homes by reading from the Psalter on a daily basis. As we can see, nothing is really lost other than our personal desire to keep Pascha alive in our hearts and in our homes.  The old habits that we broke, and the good habits we developed during Great Lent, can still be practiced, and their fruits of righteous still enjoyed.  One of the reasons for Great Lent is to help us to improve our spiritual life, in hopes that the progress we make towards holiness will continue through the rest of the year.  So, if we want to keep that Paschal Feeling alive, we should start by keeping and improving on our Lenten practices.

In the immediate aftermath of Christ’s death and resurrection, the first century disciples did not have the full understanding of the meaning of the Passion and its importance to their salvation.  But because of their sacrifices, as well as the work and sacrifices of untold men and women since that time, we can experience the full joy of Christ’s Pascha.  We do not need to live our faith in seclusion and uncertainty.  We can keep our Paschal joy throughout the year by continuing the good habits we developed during Great Lent.  Let us not wait until next year to try to reclaim the spirit of Pascha, but instead try our best, through the grace and strength of God, to live the joy and hope of Christ’s resurrection throughout the year.