Whose Life Is It Anyway?:Why We Pray The Way We Pray

Now, imagine my even greater shock when I opened an Orthodox prayer-book for the first time. Again, I was confronted by the harshest self-criticism that I had ever seen. Men like St. Ephraim, who were holy and virtuous monks and are now glorified in Heaven were stating in their prayers how wretched and sinful they had been, and I, by extention, was saying the same thing by reading their prayers at my own little icon corner. Quite simply, I felt like a hypocrite.
| 21 October 2009

Recently, I had a conversation with a Jewish friend of mine in which we found ourselves discussing the purpose and fruits of prayer. Being myself a very new Orthodox Christian, I am having to learn a whole new concept of prayer which does not conform to the loosely-protestant idea of prayer with which I grew up. In a nutshell, this approach was very spontaneous, and involved asking for help from God to obtain whatever we felt we needed at the time, thanking Him for giving us the current day, and praying for His blessings upon others. The idea of saying set prayers or of reading from a book always seemed strange to me, because it felt like I was using others’ words which were not my own. Interestingly, it was my Jewish friend who threw a new light on what prayer is, and while she spoke about it as applying to her own faith and its set prayers, I believe that this definition finds its fulfilment in the Orthodox prayer life. She said that the purpose of prayer is to align our will with the will of God. In the following paragraphs, I will discuss this definition of the purpose of prayer by relating it to some of my own experiences in learning how to pray, and then analyzing a short and well-known prayer to see how it can, in fact, align the human will with the will of God.

When I set foot in an Orthodox church as a seeker for the first time, the thing which stayed with me the most was the reading of the prayers before Communion. Over and over again, the reader stated how unworthy “I am” to even receive the Holy Mysteries. Not only was the soul’s uncleanness discussed, but even the body was spoken of as impure and polluted. I remember reflecting at the time that Communion seemed like “no fun,” as it were. All that “doom and gloom,” as I saw it then, made it seem impossible for anyone ever to receive what I saw as their due for being “in the club” with any joy, because we were such lowly creatures. Furthermore, I could not understand why people who had been duly baptized kept going on about how sinful they were. It was, to put it mildly, a shock.

Now, imagine my even greater shock when I opened an Orthodox prayer-book for the first time. Again, I was confronted by the harshest self-criticism that I had ever seen. Men like St. Ephraim, who were holy and virtuous monks and are now glorified in Heaven were stating in their prayers how wretched and sinful they had been, and I, by extention, was saying the same thing by reading their prayers at my own little icon corner. Quite simply, I felt like a hypocrite. How could I seriously pray these prayers when I knew that I didn’t mean a word that I was saying? Little did I know then, that this was precisely the attitude that these prayers were meant to provoke. 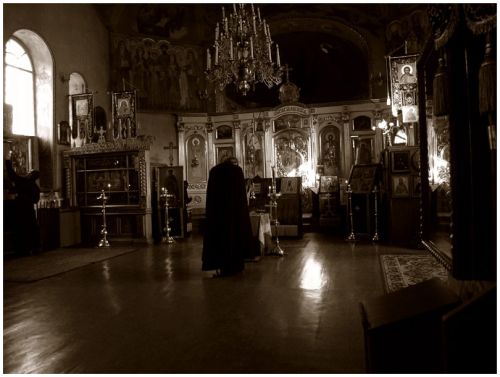 Prayer is one of the many standards of measurement which the church contains. It can be a mirror, showing us our truly sinful nature. For this, we must give glory to God. However, a far more usual result of prayer, at least in my own experience, is that it shows us what we are reaching for, and that is nothing less than a full knowledge of our sins and of ourselves, such as those who composed the prayers we read have attained. While we may feel ourselves to be saying meaningless words which have nothing to do with our personal lives, it is good to remember that prayer is a progressive act. Like water crashing on rock, prayer slowly chips away at the hardness of our hearts, and does, in fact, serve to align our will with the perfect will of God.

Let’s look at an actual Orthodox prayer as an example. This is a simple prayer, only ten to twelve words in English, but even this prayer, if repeated throughout one’s life, can serve prayer’s ultimate purpose. The twelve-word version of this prayer is: “Lord Jesus Christ, Son of God, have mercy on me, a sinner.” When I first heard this prayer, long before I sincerely and consciously sought communion with The Orthodox Church, it was incomprehensible to me. Why was it asking for mercy? Why did it focus on the self? Weren’t Christians supposed to deny the self and spend their lives in service to others? Well, here’s the thing. Yes, we must do for others, but if we don’t pray for mercy upon ourselves, we’ll never truly know what being merciful to others means.

Now, let’s look at the prayer. When we say: “Lord Jesus Christ,” we’re saying a whole lot. This is a true act of bravery and courage, and can only be granted to us, as The Apostle Paul states, by the Holy Spirit (1 Cor. 12:3). We are calling Christ our Protector, our Master, our Pilot, and our King. In our world of individualism, it is truly an act of grace that any one of us is able to acknowledge a Lord of any kind, let alone Christ, who has been called simply a teacher or a philosopher in academic circles and in the popular media for so many years now that it is hard to see Him as anything more.

The next phrase is equally staggering. Calling Christ “Son of God” points out that He is more than “just a simple carpenter with healing in his hands”, as a protestant “Christian Rock” song calls Him. He is God’s only Son, begotten by God before time was, and yet also born of a Virgin, the Theotokos, at a specific point in history. If it is hard to see Christ as our Lord and Shepherd, how much more difficult is it for the human mind to comprehend his Sonship with God, and his ability, through the taking on of our flesh even unto death and resurrection, to make us heirs of The Kingdom? Yet, again, we are granted the grace to call him “Son of God,” even if we can’t understand that Mystery.

Finally, we come to the third part of the prayer: “have mercy on me, a sinner.” After acknowledging that Christ holds our lives in His hands, and that He has the right to do this because He is God’s Son and also Lord, we ask Him to “have mercy on me,” not on John or Jane or even on the world, but on me, myself and I. Christ is then shown to be a personal God, a God who knows even my struggles and wounds, and He is also infinitely merciful. We don’t ask Him for justice, but for mercy. Mercy, by definition, is never deserved by the one to whom it is given. It is granted completely at the discretion of the one with the power to grant it. Finally, we ask Christ to “have mercy on me, a sinner.” The end of this prayer reminds me of the reason I must trust in God’s mercy, and the reason I must be merciful to others, because I am a sinner, whether I know it or not. The point is that God knows everything that I have ever done, and still, He grants that I may ask for mercy, and will not, while I continue to ask, deal with me according to His justice, which is actually what I deserve.

We must remember that God does have a will, and it is free and sovereign. The Prophet Ezekiel states that God does “not desire the death of the sinner,” but rather that he “turn from his way and live” (Ezekiel 33:11). This, finally, is the alignment which is the fruit of prayer, that we begin to desire repentance for ourselves and, by extention, that we gradually will see our own sins and have true empathy, or co-suffering, with everyone in the world. It is this empathy which gives rise to mercy and charity, and it all begins with a gradual acquiring of a new way of looking at ourselves, through Christ’s undimmed eyes. This is a great Mystery, a Mystery that is not revealed to us through the eyes of the world, much less through the eyes of western materialism.

May God grant me, His obstinate one, one day to understand those prayers before Communion, for in them, as in that great Mystery itself, there is Truth, Mercy and Life.