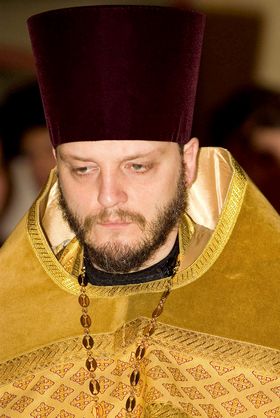 There are, of course, many reasons.

The old emigration was more ideological: it was concerned with the instruction and upbringing of future generations in the spirit of Orthodoxy, with love for the Church, for the Homeland, and for our rich Russian culture saturated with spirituality. It created churches, schools, and social and patriotic organizations. It was aflame with love for Russia and its ideals of holy Russia.

Many of the founders of “Russia abroad” have already gone to the better world; and the new emigration has a more economical character.  Although, to tell the truth, a considerable part of this new emigration visits churches when homesick, where consolation and, in a way, a piece of Russia can be found.

Nevertheless, the majority of these people loses the language quite quickly and forgets about its ancestry, while those trying to remain Russian and Orthodox have problems in bringing up their children in a corresponding spirit.

Parents, descendants of the old emigration, have the same problem. Their children assimilate and integrate into the local environment, forgetting about the great heritage of their grandfathers and grandmothers.

In our complicated foreign conditions, this is analogous to falling away from the faith, since here rejection of one’s ancestry amounts to renouncing one’s life in the Church.

As for local converts, who are zealous when they begin their integration into the Orthodox Church, they often “unconvert,” as one ever-memorable bishop of the Russian Church Abroad put it.[1] But, thank God, this does not happen to all of them.

Besides the aforesaid, we do not sufficiently explain the divine services; we do not penetrate together with our parishioners into this bottomless treasury of wisdom and piety that our liturgical traditions represent. Therefore, many people stand in church uncomprehendingly, losing interest. But the more people know, the more they will become interested and begin to penetrate the meaning of the divine services, thereby acquiring benefit and strength.

But the principle reason, in my opinion, is that we, clergy and laymen, have failed to be Christians.

When we discuss the modern vacillations of mankind – the surrounding rage, hate, temptations, and absence of faith – we blame everything on “the mighty of this world” and on the people around us – that is, on others and not on ourselves. We like to point out their sins, deficiencies, and errors, forgetting “to look in our own garden,” as popular wisdom puts it.

The Apostle Paul warned that many people would not turn to God, would not come to the Church because of us, believers, inasmuch as they do not see in us real followers of the Risen Jesus, Who would shine with His beauty and holiness, with His victory over evil, Who would through their lives spread the Kingdom of God “in this adulterous and sinful generation.”

People in our communities likely do not see us as examples of a vital and compelling preaching of Christianity, one that would inspire them to serve God. And, indeed, if we take a look at our lives, we see that, unfortunately, the life of an Orthodox person does not correspond to the Gospel by far.

Archimandrite Spyridon, a nineteenth-century missionary-preacher in Siberia, had major difficulties in preaching the Gospel to Buddhists. Once he visited a Buddhist monastery, where he had a discussion about Christianity with the monks-llamas.  After a two-hour conversation, one of these llamas said the following:

“Yes, Mr. Missionary, the Christian religion is indeed the highest and most universal religion. If there were intelligent creatures like us on other planets, they could not have another, better religion than Christianity, because Christianity is not of this world, but is God’s revelation.

“In Christianity there is nothing human or created; it is God’s thought, pure as a tear or a crystal. This thought is the Logos, which John the Theologian says became flesh in the incarnation of God. Christ is the incarnation of Logos; His teaching has shown the world new paths of life for people and was a revelation of God’s will for them. This will is that Christians live as Jesus did. And Christ’s doctrine was the echo of His life.

“But have a look yourself, Mr. Missionary, have an impartial look: does the world live as Christ taught? Christ preached peace, meekness, humility, universal forgiveness, and to love God and people. He commanded to pay back harm with good, not to collect riches, not just not to kill but also not to be angry, to preserve marriage in purity, and to love God more than father, mother, son, daughter, wife, and even more that oneself. So taught Christ; but you Christians are not like that.

“No, Mr. Missionary, first let Christians themselves believe in their God and let them show us how they love Him. Perhaps then we will accept you missionaries as God’s angels and will accept Christianity.”

Further, Fr. Spyridon writes: “How painful and offensive it was, but I understood that in many regards the Buddhist llama was right; I could not take offense at him personally. ‘What could this be,’ I thought, ‘are we Christians ourselves enemies of Christ’s preaching? Does our life really dishonor Christianity in the world?’ And I felt vividly that, indeed, my life goes counter to the Gospel” (Christian Thought, 1917).

Put simply, we should blame neither those who do not come to church nor this world that “lieth in wickedness,” which distracts them from “the one thing needful”; but we should look at ourselves. And here it is necessary to remember the words of Archbishop Anthony (Medvedev; + 2000) of Western America and San Francisco, who said: “We should not look at others and reproach them, but should care constantly about correcting ourselves and living as Christians.”

Believe me, beloved, I write these reflections neither to criticize our devoted clergymen and laymen, nor to upset them, but rather to create serious and thoughtful discussion about this important question, to learn how others solve this problem. The present spiritual crisis is, it seems to me, God’s instruction. And to receive God’s instruction means to receive mercy from Him.

Therefore, having realized our deficiencies and striving to overcome them, we should not despair, but rather try, according to our strength, to reach out to God and to put right our church life, to make it “the light of the world” and “the salt of the earth.”

[1] Editors’ note: This is a play on words in Russian. The Russian word konvert, borrowed from the English word “convert,” literally means “envelope.” Hence, the same sentence could be literally rendered: “As for local envelopes, who are zealous when they begin their integration into the Orthodox Church, they often ‘become unglued,’ as one ever-memorable bishop of the Russian Church Abroad put it.”

Translated from Russian by Ekaterina Chernysheva