So few what? People, I mean; so few people actually becoming Orthodox from a completely unchurched background? Let's be honest here. The growth of Orthodox Christianity in the last 30 years in the west has come about largely through the movement of those who already consider themselves Christians, committed members of other churches in fact, who have discovered Orthodoxy to be the truth about Christ and His Church.
| 29 September 2008

So few what? People, I mean; so few people actually becoming Orthodox from a completely unchurched background? Let’s be honest here. The growth of Orthodox Christianity in the last 30 years in the west has come about largely through the movement of those who already consider themselves Christians, committed members of other churches in fact, who have discovered Orthodoxy to be the truth about Christ and His Church. 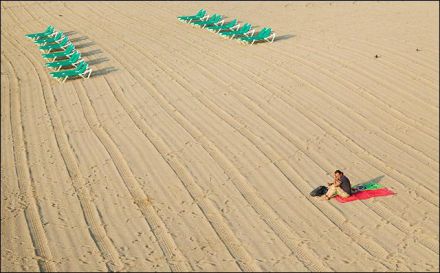 Praise God for those people. I am one of them myself. This however, is not evangelism. Evangelism is preaching and living out the gospel to those who know not Christ at all but who come to receive him as Lord and God in his body which is the Orthodox Church. There are plenty of people in the west who would fit that category as a focus for our evangelisation. In the UK at least such persons constitute the majority of the population, probably 80-90%. The fact that at the last UK Census (2001) about 70% self-declared as Christian means little, for survey after survey shows that this is little more than a tribal response and not reflected in any reasonably sufficient understanding of what the Christian faith actually is and certainly not sustained by any involvement in any church let alone the Orthodox Church.

Of course, other churches are asking “Why So Few?” all the time as well. Let us eavesdrop on a conversation between two Christians (not Orthodox) also much exercised by this question. In this conversation you will find many of the positions and counter arguments favoured by non-Orthodox Christians in the west. It’s a “invented” conversation of course but I present it so that we might, as Orthodox Christians, offer our own critique as to why many western cultures are so seemingly impervious to Christianity in general and Orthodox Christianity in particular. Let’s call our conversation partners John (J) and Mary (M). John is a conservative independent evangelical of Calvinist hue; Mary a liberally inclined Roman Catholic.

J: “Christianity in the west is not in terminal decline at all. There have rarely been any Christian societies in the past. Those that might qualify as “Christian” have been those where the churches have been biblically based and Christians imbued with a lively and active faith. These Christians have then gone on to influence their society for the good. Counting heads is both pointless and misleading. I am positive about the future because the liberal churches are now in terminal decline and making room for an authentic Christianity to re-emerge but which always constitute a faithful remnant of the elect but never a majority position.”

M: “As a liberal Christian I must say that our present troubles arise John because the Christian tradition you represent speaks of an “old world” even pre-modern view, itself a reaction to modernism. Yours is a cul-de-sac spiritual route. Most people in the west rejected this version of Christianity a long time ago and trying to revive it now will put us back even further. No we have to embrace the best of what is good from whatever source if we are to be able to reach those who have no evident religious faith; to win that is their hearts and their minds.”

J: “That sounds very plausible and attractive Mary but would you have anyone in your approach to mission make any personal commitment to Christ whatsoever, encourage them to submit themselves to any authority? Surely as a Roman Catholic you cannot so easily sidestep the papacy and the magisterium?”

M: “As a Catholic John, I do not need to sidestep any authority in my church, The Church has always moved exceedingly slowly in relation to contemporary trends but we maintain the long term view and can sit out any ‘local difficulties.'”

J: “That makes you sound rather Protestant Mary if you don’t mind me saying! I thought I was the traditional “dissenter.” Be that as it may, surely you can see that the liberal tradition has had the greater part of a century to make an impact and this it has manifestly failed to do. Our time has come. When people understand what Christianity is the walls of unbelief will come tumbling down, you see.”

M: “Well, I might agree with that John albeit I don’t think that you have the answer with your pre-modern antiquarianism. Perhaps our ongoing ecumenical debate will eventually generate a consensus on a new message for a new age.”

Although this is a very stereotyped conversational exercise it does characterise some common non-Orthodox Christian themes shared by BOTH Mary and John which sound very strange to Orthodox ears; indeed to those who may identify them for what they are, these must be unequivocally rejected.

1.     Note that both Mary and John think that they can work out between them what ails the Church’s mission in their own context. They may share radically different analyses of the problems but their methodologies by which they address those problems are in fact identical and not at all shared by the Orthodox. No Orthodox would ever claim personally authoritative insights generated by (and this is the point) simply their own subjective interpretations. This fixes the analysis squarely in the present losing most if not all of its historical context. Although we might expect John through his Biblicism and Mary through her (at least) nominal assent to the historical dimension of the Papacy and the Roman Catholic Church as an institution to be aware of sacred history, these historical dimensions are simply unexcavated givens and do not actually contribute anything to their debate. For an Orthodox Christian however, the historical dimension does not even have to be excavated; it is a living and present reality in Holy Tradition. Recast this conversation between two Orthodox Christians and it wouldn’t be too far into the encounter before the living voice of the Fathers was affirmed. This means that non-Orthodox Christians are not using even the right tools for the job. Both the analysis and the widely divergent and inconsistent prescriptions are just muddle-headed and wrong for that reason alone.

2.     Both John and Mary are using their heads and their tongues. Their hearts are not engaged, neither are their bodies, At no point in their conversation is any reference made to worship, to prayer, to repentance. Theirs is a discursive reason that truly believes it can both penetrate the divine mystery and the human predicament, provided of course they could only agree. The fact that they can not reflects the divergent paths that their two respective traditions have carved out over centuries. Even if they could agree, they would not necessarily arrive at a truly authentic answer to the question: “Why So Few?” So, instead. they have to agree to disagree. It’s better of course than killing each other and at least they share the same method … much good that will do them. I have used strong language here because from an Orthodox point of view, these approaches to the question are bordering on blasphemy, idolatry or both. We just can’t work it out from scratch using our unregenerate axiomatic deductive thinking. Before we can use our heads we need to repent in order that our minds, clarified in our hearts by grace, might truly even begin to function as God intended them to do. Carnality always leads to carnality. Deify reason (or any human human faculty) and you crucify humanity. Fall down stunned before the great Lover of Mankind and some progress might begin to be made.

Was this just an ‘straw man’ exercise then? No, not really. I have tried to put some flesh on what otherwise might come over as simply one counter argument playing by exactly the same rules and appearing therefore to refute itself in the process. Orthodox Christianity is never abstract or theoretical. It’s what you reader are doing right now as God tries to speak to you. Do you go off and have an interesting debate about that or do you listen?

The preceding characterisation of the differences between heterodox and Orthodox Christianity in the modern western context have helped us, I believe, address the question from an Orthodox stand point. Applying our own standards of observation and analysis the conclusion is sobering but also realistic. No mass conversions happen without repentance, without falling down before the majestic and loving mystery that is God and declaring all our silly chatter and superficial ideas to be utterly redundant and, of themselves, literally non-sensical.

Frankly this is a step too far for many raised in a heterodox Christian consciousness that has strayed further and further away from Orthodoxy over succeeding centuries. Conversions from this moribund, lifeless and desiccated post-Christianity both amongst believers and non-believers alike will not happen until the leaven of Orthodox Christianity within secular culture itself becomes activated by a deeper commitment to God. Such a repentance from the Orthodox will itself not happen until Orthodox Christians resist both ethnic introspection and subtle assimilation to carnal ways of thinking, believing and acting. Judgement starts with the household of God … but actually with me. There are no short cuts, no magic bullets, no easy solutions … only becoming more Orthodox and sustaining an active patient hope for the generations of Orthodox believers yet to be born whom will build on our foundation in Christ and the faith of the apostles. Ours is the long game but with a short route for each person to a deifying relationship with God as each crucial step on the way. Until that becomes much more our focus we shall remain “few.”