Why we should Let Kids be Kids! Delighting in the Gift of Childhood

A few months ago, a parishioner told me about a neighbor who would no longer allow her daughter to play with hers because she discovered that they had been playing hospital. Since they weren’t really nurses and their dolls weren’t really sick, the neighbor reasoned, such “unrealistic fantasy” could have a “negative impact on my child’s ability to discern reality from fiction.”
admin | 09 March 2010 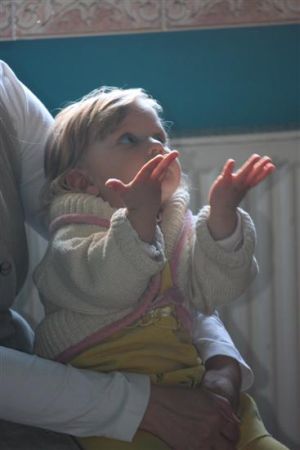 Not long ago, I was standing in the checkout line at K-Mart when the three-year-old in front of me began to melt down. He wanted one of those colorful, nutritionally questionable, snacks strategically – and purposely – placed at a child’s eye level.

His mother told him he couldn’t have it. So he begged, whined, sobbed, bargained, spat, and publicly announced, “you don’t love me, mommy!”

His mother stood her ground. Sensing that he wasn’t going to win, he pulled out the “final solution” in every toddler’s arsenal of manipulative techniques: he threw a tantrum. Clearly at the end of her rope, the mother lashed out, “Would you PUL-EEEZE act your age?!”

I couldn’t stop myself from tapping her on the shoulder and saying, “He is acting his age!”

“Ex-CUUUSE me, sir,” she glared. “This is really none of your business.”

“I fully acknowledge that,” I responded. “I’m merely pointing out that he is acting his age.”

“Well, he needs to grow up,” she retorted.

“He will, in due time,” I replied. “But for now, he’s a threeyear-old acting like three-year-olds act in this kind of situation.”

“Well, he shouldn’t act like this,” she snapped as she dragged her son, who surely would be sentenced to a 20-year time-out when he got home, from the store.

We live in a curious time, one in which we so often and so unconsciously deprive our children of their right to be children. We’re told that plopping our infants in front of a “Baby Einstein” DVD will make them smarter – or, at least, give them an “edge” over their future pre-school peers. We organize their every waking moment with play dates with the “right” neighbors, calm them down with Mozart and Beethoven symphonies, introduce them to computers long before they can utter a simple sentence, and keep them permanently germ-free with a wide array of disinfectants and anti-bacterial soaps, sprays, spritzes, and towelettes designed to route out the evils lurking in the sandbox – which we

don’t let them play in lest they get dirty.

There are even those who believe that permitting children to role play or fantasize can affect them in a less-than-positive manner. A few months ago, a parishioner told me about a neighbor who would no longer allow her daughter to play with hers because she discovered that they had been playing hospital. Since they weren’t really nurses and their dolls weren’t really sick, the neighbor reasoned, such “unrealistic fantasy” could have a “negative impact on my child’s ability to discern reality from fiction.”

The apostle Paul, in his first epistle to the Corinthians, writes, “When I was a child, I spoke as a child, I understood as a child, I thought as a child; but when I became a man, I put away childish things” [13:11]. Countless preachers have expounded on the second half of this passage, urging their flocks to live serious adult lives, to act their age, to take responsibility for their actions, and to shun the temptation to be childish. Few, however, notice that in the first half of this passage, Saint Paul acknowledges that it’s perfectly natural for children to speak, to understand, and to think like children, precisely because that’s what they are! They’ll grow up in due time, and somewhere along the line they’ll let go of their “childish things” – hopefully. But until they do, they remain what they are – or, to be more precise, what they should be. And it is up to us, the parents and others who inhabit the “village” it takes to raise them, to allow them to delight in precious, Godgiven gift of childhood.