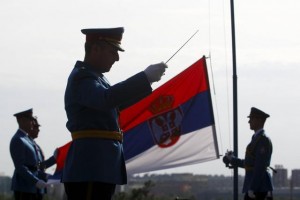 BELGRADE — The Victory over Fascism Day was marked in Serbia on Thursday with laying of wreaths at the Liberators of Belgrade cemetery.

The wreaths were laid by representatives of the Defense Ministry, Serbian Army (VS), Federation of Associations of Veterans of the People’s Liberation War in Yugoslavia (SUBNOR), City of Belgrade and Russian, Ukrainian, Belarusian, Azerbaijani, French, U.S. and British Embassies.

1395 soldiers of the People’s Liberation Army of Yugoslavia (NOVJ) and 818 Red Army soldiers were buried at the Liberators of Belgrade cemetery.

Obradović noted that the Victory Day was an opportunity to remember that Serbia had, as a part of Yugoslavia, participated in the fight against the biggest evil in the 20th century – fascism.

“Serbia, even though it was small, then stood with those countries that fought for freedom, democracy, future and a better life for all generations,” he stressed, adding that Serbia had suffered great human losses in WWII.

“Together with other countries it (Serbia) was a part of the democratic, freedom-loving tradition that set foundations of the world we live in today,” the minister pointed out.

“This is an opportunity to remember those years with pride, to remember the victims and to understand that Serbia, together with others, can build the future just like it did more than 60 years ago,” Obradović said.

City of Belgrade Assembly Speaker Aleksandar Antić said that Belgrade and Serbia today marked the Victory Day that represented a “meeting point of our past and our future“.

“We are one of the nations who gave the biggest sacrifice in fight against fascism,” he said and noted that May 9 represented a foundation of modern Europe, the EU, “our European future”.

Nazi Germany signed its unconditional surrender in Berlin on May 9, 1945.

61 countries and around 110 million soldiers took part in the war that started in 1939. Around 60 million people were killed while 35 million were wounded.

1.7 million people, including elderly, women and children, were killed in the former Yugoslavia.