“You are the Christ!”

How do we truly proclaim that Jesus is the Christ, the Son of the living God? Do our lives reveal Him through what we say and what we do, and what we do not say and do not do? Can He be seen in us, in who we are, in how we live? Or do we look just like everyone else, indistinguishable from all the rest of those in the world who do not say that Jesus is Lord and Savior? Brothers and sisters, this should not be!
Priest John McCuen | 11 July 2010

“You are the Christ, the Son of the living God.”

In the reading today from the Gospel according to St. Matthew, our Lord asks His disciples, “Who do people say that I am?” Their replies make a list of holy men, prophets of God, including Elijah, and Jeremiah, and even John the Baptizer, who had been executed only a short time before. Then our Lord asks them directly, “Who do you say that I am?” Simon Peter replies, “You are the Christ, the Son of the living God.” 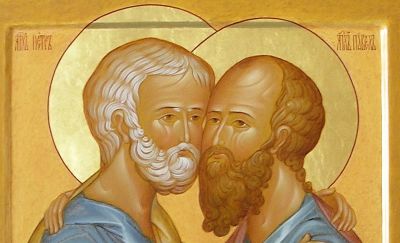 Remember that, by the time this conversation between Jesus and His disciples takes place, He has given the Sermon on the Mount; He has healed many who were sick; He has cast out demons; He has worked other miracles – the feeding of the five thousand, for one – and has taught them far more than He has publically proclaimed. Remember also that, by this time, the Pharisees and the teachers of the Law of Moses have accused Him of breaking the Law of Moses and of casting out demons by the prince of demons, and have already started plotting to kill Him. In the midst of all this, the common people have recognized Him as being holy, but have not perceived Him to be the Messiah, the Anointed One of God whose coming had been promised by God and foretold through the prophets. Remember that Nathanael, at the time of his being called to follow Jesus, had exclaimed, “You are the Son of God!” Remember that those who were in the boat when our Lord calmed the storm and Peter had walked on the water had also declared, “You are truly the Son of God!” What was different about what St. Peter had said, that earned him a blessing?

Have you ever noticed how children look like their parents? In some cases, the resemblance is there, although not always clearly; while in other cases, the resemblance is so strong as to be striking. This is true not only of appearances, but in mannerisms, such as sounding alike, walking alike, and other in other ways as well. So it is with all the previous declarations that had been made, saying that Jesus is the Son of God – for we are all sons of God, in that we are made in His image, and after His likeness. St. Peter’s declaration went beyond that, when he said, not just that Jesus is the Son of God, but that He is the Christ, the Anointed One, the Deliverer promised by God, and proclaimed by St. John the Baptizer as the Lamb of God Who takes away the sins of the world. Human senses were not sufficient to perceive as deeply as St. Peter did when he made this statement of faith. God the Father revealed this truth to the saint, so that His Son might be made known – and not just then, but, through the testimony of St. Peter, to all who hear the Gospel, at all times, and in all places. The loop of resemblance between the Father and the Son is completed, in a way, when, at the Last Supper, Philip asks Jesus to show them the Father. He replies, “Have you not known that I am in the Father and the Father is in me? He who has seen me has seen the Father.”

What about us? If the question was put to us, what would we say? Of course, because we have heard the Gospel, we know the correct response to give – but does that mean we also are blessed, as St. Peter was blessed? Or is there more to it for us than that?

Everyone has heard this bit of “folk wisdom” – “Talk is cheap.” Everyone knows this one as well: “Actions speak louder than words.” We who have been privileged to live in this time, with the Gospels written and the Church well established and a God-pleasing way of life taught to us; we who have been privileged to have been buried with Christ in our baptism, and empowered with the Holy Spirit as we were chrismated, and have received the Body and Blood of our Lord Jesus Christ – how do we truly proclaim that Jesus is the Christ, the Son of the living God? Do our lives reveal Him through what we say and what we do, and what we do not say and do not do? Can He be seen in us, in who we are, in how we live? Or do we look just like everyone else, indistinguishable from all the rest of those in the world who do not say that Jesus is Lord and Savior? Brothers and sisters, this should not be!

Let us commit ourselves, and one another, and all our life unto Christ our God. We say this again and again in our prayers, both in the worship of the Church, and in the privacy of our prayer corner. Let us also ask God the Father for the grace we need to be transformed more and more into the likeness of His Son, so that what we say and what we do brings the knowledge of Jesus Christ to those trapped in the ways of the world, longing to be set free. May God grant us grace to show the world His Son in us; and may we show the world in word and deed that Jesus is truly the Christ, the Son of the living God.

Holy Apostles Peter and Paul, pray to God for us!