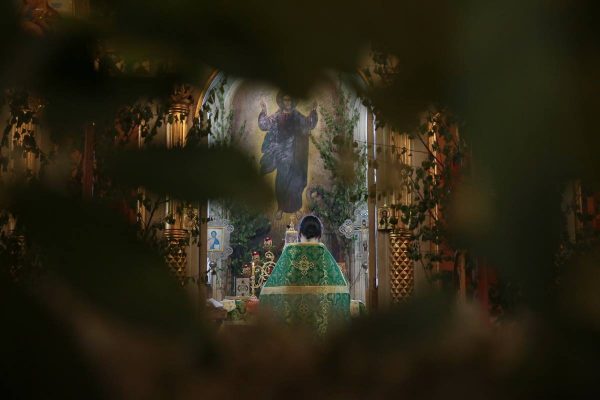 Pentecost changes everything: and, in particular, it changes our understanding of what power is. In this world, power is the ability to impose one’s will. Muscular big guys have strength in their hands. Sovereigns have armed forces. The emperor in Rome has the power – numerous, disciplined, battle-hardened legions ready to make anyone submit to his will. In modern entertainment films, superheroes have the power – during the daytime they are invisible clerks, and at night they show their superpowers to kill hordes of villains and rescue beauties from trouble.

People dream of strength and try to get it: a flimsy schoolboy wants to build muscle and intimidate his offenders, states create powerful armies, and where states decline, people immediately start creating some tribal militias and private armies to be able to coerce and intimidate, and so that no one could coerce and intimidate them. People think that it is good to be strong and not to fear anyone: although very often it is force that becomes a source of fear. The Spartans were a militaristic society that worshiped strength: they simply had to be that out of fear that their slaves, the Helots, would revolt. Medieval castles menacingly towering over the terrain are the signs of power (they were built to show it), but at the same time they are the signs of fear that the serfs would rebel, and the neighboring ruler will appear to take away the land.

And on the day of Pentecost, the Apostles receive a power that in this world would not be called power at all. “Apostles? And how many legions do they have?” a Roman emperor could ask. Indeed, no legions, no muscular arms accustomed to murder, no clanging gland. They have no superpowers that would allow killing enemies at a distance, or penetrate invisible into the chambers of foreign sovereigns, or somehow else make violence to their enemies in order to force them to submit to their will. When this power is manifested, some people do not show respect at all: “Others mocking said, These men are full of new wine” (Acts 2:13).

They should try to laugh at the emperor! Why, at the procurator… Well, at least at the last Roman legionary: they would immediately see who had the power in his hand… As the poet says, “I will buy everything, the gold said, I will take everything, the steel said.”

But on the day of Pentecost a force invades the world, compared to which the emperor with all his legions is an empty place. “Less than nonentity and emptiness,” as the Prophet said. Almighty God, the Holy Spirit descends to people to live among them and in them: in the Church. And His goal is not to fight with anyone for power: He is already the Lord of everything. His goal is to save the fallen human race. Superheroes come to the villains to destroy them; the Holy Spirit comes to save them and heal them.

The Holy Spirit leads people to repentance and faith in the Lord Jesus; he does this by giving the mouth and wisdom to the preachers of the Gospel, courage to the martyrs, and the transformation of life that serves as a testimony to the world to all Christians.

This is a powerful invasion from another world, from the coming heavenly Jerusalem, which is already present in the world in the face of the saints of God. There, outside the Church, outside Pentecost, nothing changes: spears are replaced by muskets, muskets by rifles, rifles by automatic weapons, but the world continues to rush in the same circle of fear and violence. Pentecost breaks this circle, the vanguards of the kingdom of God enter the world bringing life, not death, and life built on completely different grounds. The power of God captures the weak, the frightened and, by worldly standards, the weak people who have neither gold nor steel, and makes them witnesses of the victory of Christ over this whole world.

It turns out that the only true, real thing is the kingdom of the love of God, the love that “is shed abroad in our hearts by the Holy Ghost which is given unto us.” (Rom.5: 5), and this world is doomed to disappear, with all its ghostly glory and power. The emperor will die, and all his legions, too, then the empire itself will perish, and others will replace it, which will also disappear in turn. But the saints of God will be forever: and they will see with their own eyes how this whole world will come to an end, the Plan will come true, the dead will rise and enter into everlasting joy.

Moreover, the world is already coming to an end: the Kingdom is already here in the face of the Church, Christ has already reigned, He has already sent messengers to gather His elect.

We find ourselves in two parallel realities – in this world, which is leaving, and in the Kingdom, which is coming. The saints are the subjects of the kingdom already living among us. And we hesitate between the one and the other; this world with its fear and violence continues to claim its rights against us; and sometimes we give in. But Pentecost undoubtedly opens another Kingdom to us: a lot of things in this world cannot be taken there, and we have to open our hands and let go of our fears, our hostility, our claims for rightness, our hopes for the power of this world; because dragging all this in the kingdom will not work.

As an English playwright, a contemporary of Shakespeare, Christopher Marlowe said, “all places shall be hell that are not heaven”, and we’d better leave everything that we cannot take with us to heaven. We do not have the strength to do this? But this is precisely what we are told about – “you shall receive power”.