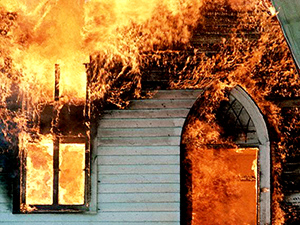 The Ministry of Interior reports the incidents without specifying which group they belong to. The young men are allegedly responsible for two of the seven church fires recorded this year in the predominantly Muslim Russian republic.

A group of men, aged 22 to 35, allegedly set two Orthodox churches on fire in mid-November using Molotov cocktails, the Interior Ministry said in a statement.

A wooden church in the village of Lenino was completely destroyed, whilst in the second case a guard managed to put out a fire in a church in the town of Chistopol, the ministry said.

Although a predominantly Muslim republic, Tatarstan has never had any major problems with religious coexistence. However, a total of seven churches suffered arson attacks this year. Nothing like it occurred in 2012.

The Attorney General’s Office pointed the finger at “unidentified extremists” who now could get up to 20 years in prison.

Muslim religious authorities have also come under attack. Last year, the republic’s the most senior Muslim cleric survived an assassination attempt, which the authorities blamed on radical groups from the North Caucasus. (N.A.)