Source: No Other Foundation
Archpriest Lawrence Farley | 18 May 2019 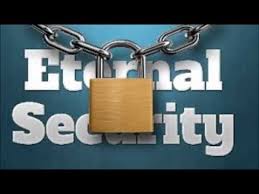 The first knock-down drag-out theological scrap I ever had was in high school and it was over the doctrine of Eternal Security. I was not keen to have the scrap because the person I was contending with was a spectacularly pretty girl to whom I was greatly attracted, but I knew that truth trumped hormones. Not by much, mind you, but enough for me to defend what I thought was the truth and argue fiercely and long.

High school was a long time ago, and I don’t remember all the back and forth of the debate, but I do remember her saying that the very term “eternal life” argued for the doctrine of Eternal Security: if one had eternal life and then lost it, then it couldn’t very well have been eternal, could it? Too bad I didn’t know Greek back then, or I would’ve replied that the term aionios (eternal) refers primarily to the quality of the life in Christ, and only secondarily to its endless duration. If the main idea had been endlessness, the Greek term aidios would have been more appropriate. But Greek would have to wait until college.

The doctrine of Eternal Security sometimes is known by the tag “once saved, always saved”. The main idea is that salvation by its very nature changes a person so much that apostasy becomes an existential impossibility. But, one does ask, what then about the cases of people who had been saved (i.e. who “said the Sinner’s Prayer” and “asked Jesus into their heart”) and then subsequently fell away and stopped believing in Christ or acting like a Christian?   Replies come in two forms, one wrong and the other crazy. The former argues that such a person could not have been a “real” Christian in the first place and that there was something fundamentally flawed about their supposed experience of salvation. The latter insists that the apostate and unrepentant sinner will still be saved on the Last Day even if he had committed and persisted in grievous sins such as murder or adultery. He would, however, “lose his reward”. The former reply is a brilliant example of circular reasoning, and so it can never be crudely proven wrong. It does however mean that no real existential and subjective assurance is possible, for presumably the lapsed apostate at one time felt as sure that he had been eternally and securely saved as anyone else. The latter reply is not only wrong, but dangerous and demonic, for gives to those in danger of damnation a false sense of security.

Where do Evangelicals get this idea of Eternal Security? Not from the Bible, but from Calvin, and in its earlier version it went by the term “the Perseverance of the Saints”. It formed part of the larger and more comprehensive Reformed doctrines of Man, the Fall, and the nature of grace and salvation. Students of Mr. Calvin will recognize it as part of the famous TULIP acronym, which stands for the doctrines of Total Depravity, Unconditional Election, Limited Atonement, Irresistible Grace, and the Perseverance of the Saints. The idea is that man is so fallen and incapable of even beginning to begin to begin to repent that God has to do it all. Before time began, God chose (or elected) certain individuals to be saved, and certain other individuals to be damned, the former to the praise of His grace, and the latter to the praise of His justice. Those elected to be saved were irresistibly drawn by the Spirit to repent and exercise faith in Christ, whose death on the Cross not only paid the price for salvation but also accomplished it (thus Christ died only for the elect). Having been irresistibly drawn to faith in Christ, they were irresistibly kept in that faith, and so could not fall away. The technical term for this understanding of divine grace is “monergism”, and the idea is that God’s energy alone is the only effecting energy involved (hence the “mono”). Man’s free will contributes precisely nothing; he repents and believes because God wills it and does it all. To be fair, the Reformed to not conceive of man as an automaton, repenting and believing automatically like a machine with no decision required from himself. A good TULIP preacher will still tell his audience to repent and believe. But he will say that if the sinner repents and believes it is only because he had been previously elected and was now being irresistibly drawn.

Many Evangelicals who do not buy the full Reformed package and who would balk at the notion that Christ died only for the elect still cling to the doctrine of Eternal Security, not realizing it is part of a larger and coherent system of thought. But the doctrine only makes sense if one accepts this total Reformed package. I do not, of course, but I can still see how each one of the elements in the TULIP system implies all of the others. Saying one cannot fall away because God irresistibly drew one to Christ in the first place to fulfill an unconditional election may be wrong, but at least it makes consistent sense as part of a system. Saying that one cannot fall away because the experience of salvation changes one internally makes no sense, mostly because experience teaches us that it is not so.

Of course, the Scriptures teach us that as well. The New Testament is stuffed to overflowing with warnings not to apostasize, which it wouldn’t unless apostasy was really possible. I do not warn my grandchildren about the dangers of walking on the ceiling, because walking on the ceiling is not possible for them, despite their Spider-man pyjamas. We only warn about dangers that are real—like apostasy. Judas Iscariot is one example that comes to mind: he certainly fell away to the point of damnation (see John 17:12, Mark 14:21), and he certainly was once saved (Matthew 19:27-28, Acts 1:17). If one of the Twelve could fall away, then anyone can. One could write a book warning of the possibility of apostasy. And come to think of it, someone did—we know the book as The Epistle to the Hebrews.

I suspect that the doctrine of Eternal Security is the Evangelical’s unbiblical and clumsy attempt to meet a real pastoral need—that of assuring the trembling penitent soul that all will be well. I often think that some forms of Evangelicalism have a view of God in which God’s love cannot really be trusted. It is felt that He is angry and eager to damn, keen to insist on justice and to keep out of heaven as many people as He possibly can. This is not said in so many words, of course, but it still functions emotionally as their view of God. Given this, one fears to lose salvation if one commits a sin, or takes a sideways step, or is lazy in devotions or church-going or Bible-reading.

One hears of people being haunted by the fear that perhaps they have lost their salvation, that on Monday morning they were saved, but by Saturday evening they were not sure, because they had a bad week. But one cannot lose one’s salvation like one loses one’s car keys. Salvation does not gradually evaporate like morning dew. One can drift away over time, of course, but this drift involves making decisions. One decides to forego prayer and to stay away from church; one decidesto drift. I suspect that the notion of Eternal Security was meant to function as a cure for the classic disease of scruples. If one does not trust God’s love and imagines that a deficit of devout feeling involves a loss of salvation, then Eternal Security serves to reassure that trembling soul that it needn’t fear such a loss of feeling. It overshoots itself, of course. It is possible to lose one’s salvation, but it takes more than simply having a bad week or feeling less enthusiastic about spiritual things than one did when first converted.

The trembling soul should not be given the false medicine of Eternal Security, but the true medicine of the Eucharist. Salvation is not just a single experience; it is also an ongoing journey. On that journey one continually returns to God for renewal, forgiveness, and cleansing. Penitent reception of the Eucharist assures us that we will be saved if we continue along the faithful Eucharistic path. It is as the Eucharistic prayer itself says: those who partake receive purification of soul, the remission of sins, the communion of the Holy Spirit, the fulfilment of the Kingdom of Heaven and boldness towards God. Standing every week at the Chalice, we are eternally secure.