According to the Proto-Gospel of James, Righteous Joseph was away for the summer doing construction work while the infant Christ was growing in the womb of Mary. In the autumn, Joseph returned home to find his espoused wife seven months pregnant.

The details of this encounter between Joseph and Mary are not recorded in the Scripture.  A few of the Fathers of the Church have attempted to construct a possible dialog between the two, with a frustrated Joseph making accusations and a preachy Mary quoting scripture.  I find such supposed dialogs hard to imagine.  After all, the Gospels say that Mary “treasured these things in her heart,” implying that she was not wont to talk about her spiritual experiences. Also, Her Son when accused was silent. I tend to see the encounter as St. John Chrysostom does.  Sticking closely to the biblical text, as he usually does, St. Chrysostom says that Mary remained silent before her husband’s questions and doubts–whatever they were.  And we know from the iconographic tradition of the Church that Joseph did struggle with doubt.

In the icon of the Holy Nativity of Christ, usually in the lower corner, one sees a thoughtful Joseph being spoken to by what looks like a shepherd often wearing a furry coat. That fellow represents doubt.  And why wouldn’t Joseph struggle with doubt? After all, the Annunciation took place between the Mother of God and the Archangel Gabriel when Mary was alone.  And according to the Gospel, Her cousin Elizabeth was the only one who knew of Her pregnancy (and that by revelation).  Joseph had gone off to work well before Mary began to show her condition, so when he came home, suddenly he was confronted with an obviously pregnant espoused wife. 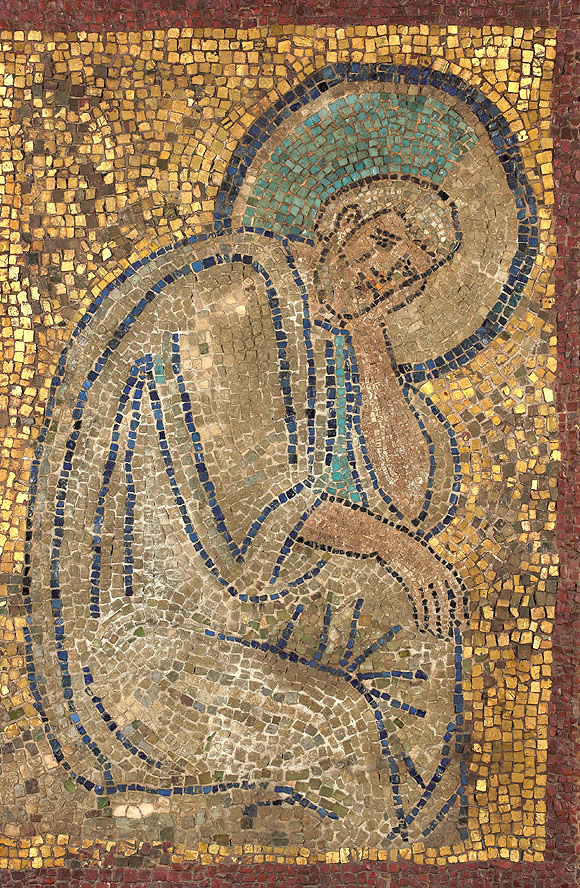 On many levels, Joseph was in a pickle. Mary was a well known consecrated Virgin.  According to Church Tradition, after She had been reared in theTemple–probably by the Righteous Anna (see Luke 2:36)–and when she reached marriageable age, Mary had to be married to a righteous man for her protection as a consecrated Virgin (Her father and mother having died and there being no near family to take her in and protect her).  According to both the Gospel of Psuedo-Matthew and the Proto-Gospel of James, lots were cast by the priest among eligible righteous widowers to determine who would have the honour of receiving the righteous Virgin into his home.  The purpose of this “marriage” was not pleasure or procreation.  The purpose of this marriage was to provide a place of safety for this well-known young woman to continue her life of prayer and consecrated Virginity.  This is why a candidate for this honor was chosen from among old widowers who had already established families.

But less than a year after the Righteous Joseph had received this great honor of protecting the Virgin Mary, she is found pregnant in his house.  What was everyone to think? Had Joseph failed to protect Mary?  Had Joseph himself violated Her? Or had everyone been deceived?  Was the Holy Virgin not the holy virgin she appeared to be?  Doubts assailed the Righteous Joseph.

In the Gospel of Matthew we are told only the following details of Joseph’s struggle: “After [Jesus’] Mother Mary was betrothed to Joseph, before they came together, she was found with child of the Holy Spirit.  Then Joseph her husband, being a just man, and not wanting to make Her a public example, was minded to put Her away secretly.”

Note it says that Joseph was a “just” man (this, indeed, is why in the Church he is called the Righteous Joseph).  Normally we associate justice with the application of the law.  But Joseph does not seek to apply the law.

According to the Law of Moses, a betrothed woman who is found pregnant is to be stoned to death in the city gate.  No, Joseph does not seek to apply the law.  The moniker “Just” does not refer to justice as we most commonly understand it.  Justice for Joseph is to show mercy.  Justice for Joseph is to quietly send Mary away (perhaps to a cousin in the countryside).  Justice for Joseph is to bear the reproach he would certainly suffer so that his betrothed wife does not suffer any more than the consequences of her presumed actions require.  Even in the face of sure ridicule and public shame, and certainly with great disappointment and confusion, the Righteous Joseph decides to show mercy and protect from severe punishment his apparently unfaithful wife.

And then the Angel comes to him in a dream.

Why did the Angel wait?  Couldn’t Joseph have had the same dream two or three days earlier–the night before he arrived home?  Why did the Angel wait until after Joseph struggled through his doubt, anger and frustration?  The Angel waited because Joseph was a just man, because in allowing Joseph to struggle to show mercy in the face of doubt, Joseph’s righteousness is manifest.  Who he is, is manifest in what he does.

Doubt in all its forms blankets our life.  There is no easy way to know what the right (the just) thing to do is.  But the Righteous Joseph provides an example for us.  No matter how loudly the “facts” cry out that justice lies in the way of punishment, mercy triumphs over judgment (James 2:13).  Or as the prophet Zachariah says, “Execute true justice: Show mercy and compassion everyone to his brother” (7:9).

Most viewed articles
Loving Your Enemy Will Change Your Life177
The Kingdom of God110
A Nurse Pulled Three Newborns Out of a Hospital Hit by the Beirut Blast108
Greece Announces 151 New Coronavirus Cases; Cancellation of All August 15 Services63
Messiness in the Modern World57
The feast day at St Seraphim Memorial Church is Marked by Primatial Service55
Patriarch John of Antioch: We Are Holding Beirut in Our Hearts34
The Fear of God is Reverence for and Love of Him1
Most popular authors
Pravmir.com team266
Archpriest John Moses177
Fr. Andreas Agathokleous110
Archpriest Stephen Freeman57
Maria Trushanina1
Metropolitan Athanasios of Lemessos1