Photos: the Catalog of Good Deeds

The tradition of religious processions has a very ancient history. It begins, in a sense, as early as the Old Testament times. In essence, the procession of the cross is a march, a journey led by the Lord. Therefore, perhaps, one of the first prototypes of the cross processions was the Exodus of the Jews from Egypt under the leadership of God Himself and his prophets and servants Moses and Aaron.

Also, in my opinion, you can view the procession of the cross as a symbolic battle of good and evil, of people led by the Almighty against the devil and demons. Let us also recall the battle of the ancient Jews with the Amalekites during the Exodus (second half of Chapter 17 of the Book of Exodus). It is a symbol of the cruciform lifting of arms by the Holy Prophet Moses. When he did it, the Jews would prevail over the enemy. When Moses was tired and lowered his arms, the Amalekites would prevail. It lasted until Aaron and Hur helped Moses to hold his tired arms up. Then the Jews won with God’s help. There is something special in this joint, united, catholic erection of the Cross in prayer.

There is something profound and significant in the tradition of religious procession.

We know from the Old Testament quite a few liturgical ceremonies that are similar to the processions.

The triumphal procession of godly women, with prayer and musical instruments, led by Saint Miriam, the sister of Moses, in honor of the parting of the sea and the deliverance of God from the hand of Pharaoh (Exodus 15:20, 21). 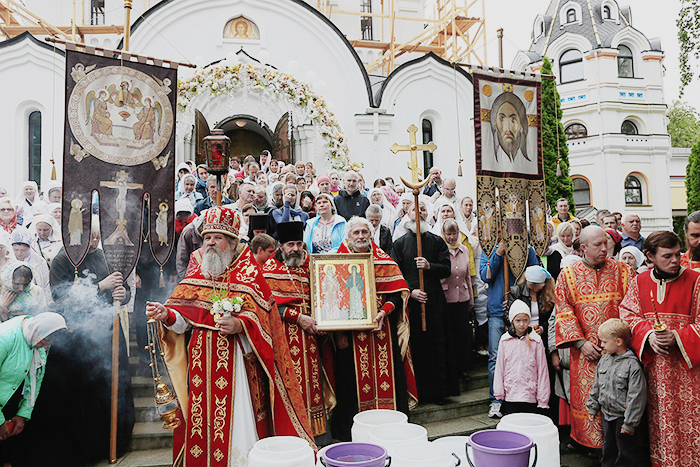 The procession with the Ark of the Covenant, trumpets, and prayer by the Jews around the walls of Jericho (Joshua 6), and the victory of the people of God over the Gentile city.

The transfer of the Ark of the Covenant to Jerusalem by the Holy Prophet and King David in the presence of a great multitude of priests and people (2 Samuel 6).

The main prototype of future religious processions in the Church in the New Testament is the Way of the Cross of Jesus Christ on Golgotha, during which He was accompanied by the Blessed Virgin Mary, the Holy Apostle and Evangelist John the Theologian, and the myrrh-bearing women. This is where we can see that God blesses processions held in His honor and glory. The procession of myrrh-bearing women to the Holy Sepulchre can also be considered a sacred procession for the sake of God. In the course of this procession they witnessed the great miracle of the Resurrection of Christ.

In the subsequent liturgical practice of the Church, religious processions were often called litany (Latin) or litiya (Greek). It means “prayer” or “petition”. Litany (litiya), as a rule (as well as during the All-Night Vigil), is a symbol of the Church coming out of its blessed place (altar; heavens) and entering the world in order to sanctify it by herself. God Himself enters the world to save humankind. This is the essence of the procession of the cross.