Source: Pravmir.ru
The faithful made ​​their way from the city of Bethphage to Jerusalem. The celebration began with a Vigil and the blessing of palms.
Natalya Mihailova | 18 April 2014
April 15, 2014. PRAVMIR. In Jerusalem, on the eve of Palm Sunday, a procession repeating the earthly path of Jesus Christ was held from Bethphage to Jerusalem. 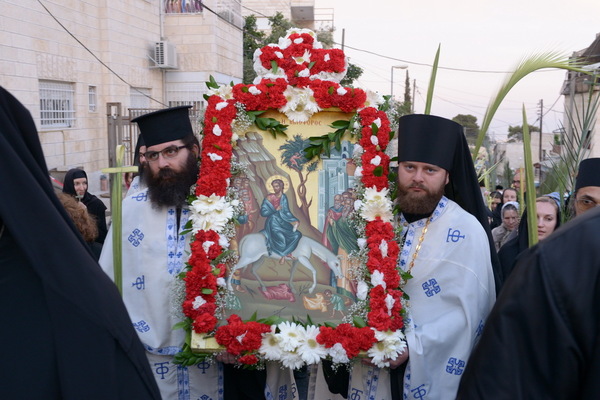 Festivities began with a Vigil at the Holy Trinity Cathedral, headed by Igumen Theophan, head of the Russian Ecclesiastical Mission. Following the reading of the Gospel, the blessing of palms, and the completion of the service, the faithful went to the starting point of the procession.

The procession traditionally starts on one of the hills of Bethpage, where the Greek Orthodox Monastery of the Entry into Jerusalem stands, the press service of the Russian Ecclesiastical Mission stated. Located there is a canopy above the stone from which, according to tradition, Jesus mounted the donkey. A moleben [supplicatory service] was held, after which the procession began its move toward Jerusalem, headed by Metropolitan Hesychius of Kapitoliada.

First the procession went down a hill and up the Mount of Olives, where the Holy Ascension Convent stands, then down to the Kidron stream, then moved up to the Lion’s Gate, where the final prayer was read at the Church of the Nativity of the Most Holy Theotokos​.

Participants of this year’s procession included Abbot Theophan (Lukyanov) of the Russian Ecclesiastical Mission, Mission clergy, the sisters of the Gorny Convent, along with Metropolitan George of Nizhny Novgorod with a large group of pilgrims.