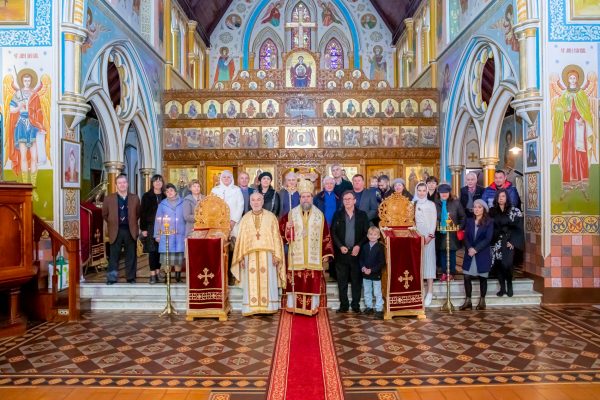 The “Holy Apostles Peter and Paul” Romanian Orthodox Cathedral in Melbourne, Australia, celebrated on Monday its patronal feast, which coincided with the 12th anniversary of the Romanian Orthodox Diocese of Australia and New Zealand. On this occasion, His Grace Mihail gave an impressive account of his visit to a small Romanian community from Dunedin, one of the southernmost places on the world map.

The patronal feast of the cathedral also marked Bishop Mihail’s 12-year ministry in Australia and New Zealand. “We have made great progress throughout our diocese. There were communities with no church and no priests. Since distances are quite great, the Romanian faithful had to go to Russian, Greek or Antiochian churches.”

The bishop also said there are Orthodox Romanians who migrated to other Christian denominations. That is why it is a duty for the Romanian clerics and faithful “to look for the lost sheep of the house of Romania on the Australian continent and to bring them to our sheepfold, which is our Romanian Orthodox Church, where they received the Holy Baptism and from where they left.”

His Grace Mihail announced that local priests will celebrate the Divine Liturgy in different Romanian communities throughout the year, “so as people get to know each other and keep in touch with the Church.”

Bishop Mihail recalled a pastoral visit he made to Dunedin, on New Zealand’s South Island. “They had never been visited by a bishop before. We have around 25 families in the city and in the area around. They work at the sheep and cattle farms,” said the bishop.

These are Orthodox Romanians, but some of their children were not baptized. To reach them, the bishop flew for almost two hours and then he drove.

“I arrived for Easter and we celebrated the Lord’s Resurrection together. They confessed their sins, they prepared themselves and their children to receive the Holy Communion. I also officiated different blessing services for them and have kept them in my heart ever since, incessantly praying for them,” recounted the bishop.

It was the first Easter service this community has ever had.

“People told me nobody brought the Easter Light to their small community,” added His Grace. “They would gather together, crack red eggs, keep Orthodox traditions, but they never had a Divine Liturgy celebrated in their community on Easter or Christmas. There are many other places like that and we need to go to them and to keep them close.”

Photography courtesy of the Romanian Diocese of Australia and New Zealand