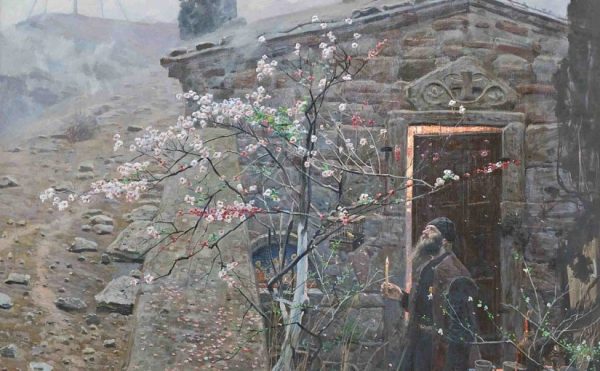 Featured image is entitled Resurrection by Pavel Viktorovich Ryzhenko (1970-2014).  It was taken from meettheslavs.com

As Great Lent rapidly approaches, I think it is important that we remember the ultimate goal is union with God, by means of asceticism and repentance. The latter will be the subject of this article.

There are a multitude of penitential hymns that focus on our unworthiness. Such hymns are meant to help us toward repentance and reveal our hidden pride. However, sometimes we fall into despair. What some of us don’t realize is that pride is a coin with two sides: egoism and despair. Both are dangerous because they cut us off from being receptive to God’s grace and love. Egoism blinds the soul saying, “I’m special and gifted, even more so than those around me; I’m doing alright spiritually.”

Despair can also make claims about being special, “I am special, but I’m especially bad, so much so that I can’t be saved.” Usually, it involves self-condemnation and self-loathing that leave one feeling depressed or hopeless. Like egoism, it is an unhealthy fixation upon ourselves. While egoism fills us with a bunch of hot air, despair fills us with mire and filth. However, the purpose of repentance is to be an act of self-emptying.

A healthy contrition might say something like, “I am wicked, I am the chief of sinners. I have fallen far more than any other man because I’ve known the truth, I know what I should do, but I keep sinning anyway. But I also know that no matter how far I descend, Christ can reach deeper; no matter what depths of hell I fall into, Christ is there. He is there to pick me up, to bring me back up, and not only to the surface, but into heaven itself. There is nothing I can brag about, there is no good in me, which makes it radical, even scandalous, that God loves me so much. Glory to Him who has reached into the nethermost hell to bring us up to sonship in God!”

The Apostle wrote, “For godly sorrow works repentance to salvation not to be regretted: but the sorrow of the world works death” (2 Cor. 7:10). Despair is a worldly sorrow that leads to spiritual death. But the Church is calling us to godly sorrow. We are not simply to beat ourselves up – no good will come from that. We are being called to unite to the love of God which requires that we turn from our sinful thoughts, words, and deeds and focus our attention on the goodness of God.

I know from my interactions with others that those who had a difficult childhood will often struggle with finding a healthy, balanced repentance. Such people, especially those who had cruel or abusive fathers, will frequently struggle with despair. I have no silver bullet answer other than to continually reject self-abusive thoughts when they come. It can feel like a perpetual game of whack-a-mole in trying to push these thoughts away.

St. Macarius the Great wrote about warring with these habitual thought patterns that we have developed due to life’s circumstances. He writes,

Then you enter into a battle with your nature in its old habits and custom with which you grew up. And in warring against such custom, you discover thoughts that oppose you and they war against your mind. These thoughts drag you about and keep you occupied…

Then you begin to do the struggle and fight the war, putting thoughts against thoughts, mind against mind, soul against soul, spirit against spirit. In a word, the soul enters into an agony. For a certain hidden and subtle power of darkness is revealed that has been entrenched in the heart.

And the Lord is near to your soul and body, seeing your battle. And he puts in you secret, heavenly thoughts and he begins interiorly to give you rest. But he allows you to be disciplined, and grace directs you in these very afflictions. And when you reach your rest, grace makes itself known to you and shows you that it was for your own advantage that it permitted you to be exercised [1].

If you read that and think, “I’m too wretched for God to give such heavenly thoughts, rest, and grace to” then you are already entertaining thoughts of despair. The spiritual whack-a-mole with your thoughts needs to begin right now. Push those thoughts away, focus on the goodness of Christ, his great love for you, and the many ways he has come through for you. Yes, you are unworthy of such gifts, but that’s what makes them acts of mercy and grace. If any of us were worthy of God, then He would simply be paying us our owed dues.

We must focus on gratitude, begin thinking about everyone and everything God has blessed us with. God loves you immeasurably, which is why you must throw off the heavy chains of despair that keep you captive to the whispering of the demons. There is a battle going on right now for your mind and the thoughts that run through it. There will be resistance from your old habits and the enemy’s tricks; but for those who struggle, there will eventually be grace and rest.

May God be with us during this struggle of Great Lent, helping us to focus on Him at all times.

The First and Last Judgments

Then I saw a great white throne and Him who sat on it… And I saw the dead,…