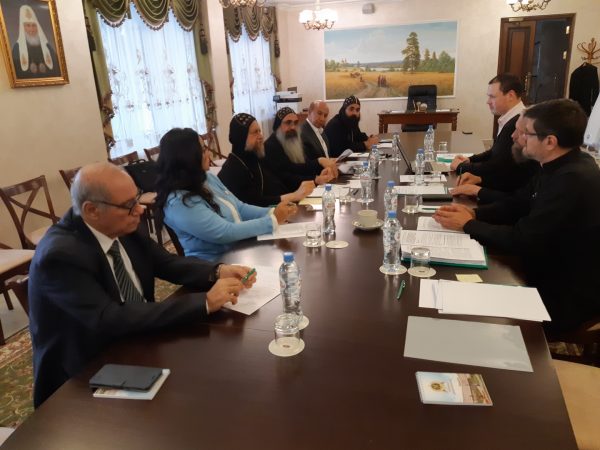 The 4th Plenary Session of the Commission for Dialogue between the Russian Orthodox Church and the Coptic Church took place from September 19 to 24, in Moscow.

The session was preceded by a meeting of the Commission members with His Holiness Kirill, Patriarch of Moscow and All Russia, which took place on September 20 at the Supreme Church Council Hall of the Cathedral Church of Christ the Saviour. Metropolitan Serapion thanked the Primate of the Russian Orthodox Church for the welcome and made a report on the Commission’s current activity and further plans for its work. His Holiness Patriarch Kirill cordially greeted the guests pointing to the invariably good relations binding the Moscow Patriarchate and the Coptic Church and to the ages-old friendship between the nations of Russia and Egypt. His Holiness made a special mention of the successful work of the Commission and the high significance of its joint projects. Among them are:

–        Bilateral theological consultations on the Joint Commission’s work on theological dialogue between the Orthodox Church and the Oriental Churches;

–        Joint work to promote pastoral care for the faithful of the two Churches residing in Egypt and Russia;

–        Academic cooperation between the leading Russian and Coptic theological schools;

–        Coptic students’ enrollment in Russian secular universities and maintaining contacts with them on the level of local dioceses of the Russian Orthodox Church;

–        Contacts between the structures of the two Churches working in the mass media sphere;

–        Exchange of the experience between church social service specialists;

–        Coordination of cooperation in giving support to suffering Christians in several regions of the world;

His Holiness Patriarch Kirill asked the Coptic Church representatives to convey his worm greetings to the Patriarch Tawadros II, who this year marks his 70th birthday and the 10th anniversary of his election to the Patriarchal See.

During its session, the Commission discussed the implementation of agreements reached by the previous meeting, which took place fr om May 27 to 31, 2019, in Cairo, and worked out a programme for developing the bilateral cooperation for the nearest future.

The Commission enumerated the following projects implemented in the previous period:

–        September 12-19, 2019 – trip of a delegation of abbots, abbesses and sisters of the Coptic monasteries to Orthodox monasteries in Moscow, Moscow Region, and Nizhny Novgorod including the Diveyevo Holy Trinity St. Seraphim Convent;

–        September 19-27, 2019 – visit to Orthodox holy places in Moscow and Sankt-Petersburg by a pilgrim group from the Coptic Diocese of Los Angeles;

–        August 23 – September 1, 2021 – trip of a delegation of abbots and brethren of Coptic monasteries to visit shrines and historic-cultural sights in the Metropolises of Moscow, Tver, Novgorod and Sankt-Petersburg and monasteries in the Russian North including the Valamo Monastery of the Hole Transfiguration;

–        November 6-12, 2019 – visit to churches and monasteries in Cairo, Alexandria and the Nitrian Desert of a pilgrim group from the Metropolis of Altay headed by Metropolitan Sergiy of Barnaul and Altay;

–        In the same period – visit to Egyptian Christian holy places by a pilgrim group of brethren of the Raifa Monastery of the Nativity of the Mother of God, headed by its abbot, Hegumen Gabriel (Rozhnov);

–        March 25-April 1 – trip to Egypt by a delegation of abbots and brethren of monasteries of the Ukrainian Orthodox Church, headed by the abbot of the Sviatogorsk Monastery of the Dormition, Metropolitan Arseny of Svyatogorsk

–        Summer 2022 – publication by the Moscow Theological Academy Publishers of the first Russian version of ‘The Correspondence of Archbishop Peter Mong of Alexandria with Archbishop Acacaus of Constantinople’. It is a unique literary monument reflecting the Christological disputes of the time of the 451 Council of Chalcedon and revealing a multitude of interesting details and particulars of that period.

–        2019-2022 – The Coptic Church grants the Russian community in Hurghada a church facility for divine services. The dean of the Moscow Patriarchate parishes in Egypt is given assistance in settling legal and other matters requiring the state agreement;

–        Autumn 2020 – registration of a parish of the Coptic Church in Moscow as legal entity with the help of the DECR and the Moscow Patriarchate Legal Service;

–        Autumn 2021 – the Coptic Patriarchate’s gratuitous allotment of a church compound in Cairo for the work of a parish of the Russian Orthodox Church;

–        June 24-28, 2022 – visit of Metropolitan Leonid of Klin, Patriarchal Exarch for Africa, to Egypt and his meeting with Coptic Patriarch Tawadros II.

–        Summer 2021 – In academic cooperation with the Institute of Coptic Studies and the library of the Monastery of St. Macarius the Great, the 4th century Coptic manuscript The Last Dialogue of St. Macarius the Great was made for the first time in history. It was the- great saint’s last lifetime spiritual admonition recorded by his disciples;

–        October 11-17, 2021 – the 3d round of negotiations on the development of cooperation between the theological schools of the Russian Orthodox Church and the Coptic Church;

The beginning of 2022-23 academic year – one at a time new students from the Coptic Church have been enrolled the Moscow and St. Petersburg Theological Academic

V. Programs for promoting the enrollment of Coptic youth in Russian secular universities and maintaining contacts with them on the level of local dioceses of the Russian Orthodox Church.

Since 2018, young Egyptian Christians have had an opportunity for being annually enrolled in leading Russian universities under the special educational quota established by the Russian Government. With the blessing of his Holiness Patriarch Kirill of Moscow and All Russia, young people regularly meet with the ruling bishops and heads of diocesan departments and hold joint activities in deaneries and particular parishes. In the last year alone, with the help of Hieromonk Dawould el-Antony, representative of the Coptic Church in Russia, such activities have been held in Moscow, St. Petersburg, Nizhny Novgorod, Penza, Perm, Yekaterinburg, Cheboksary, Syktyvkar, Chelyabinsk, Tyumen, Novosibirsk, Orel, Tambov, Rostov-na-Donu, Volgograd and Nalchik.

VI. Contacts in the mass media

–        2019-2021 – Several working trips were made to Egypt by camera groups of TV channels ‘Spas’ and ‘Russia – Culture’. The camera materials were used to create a number of popular outputs of the program ‘Pilgrim’ (Spas TV channel). Two series were created for the above-mentioned programs about Christian Egypt, with the first one on the history and today’s life of Egyptian Christians and the second on the Egyptian main holy places as parts of the famous Holy Family pilgrim route.

–        It is planned to produce in Russia a documentary on the beginnings, traditions and today’s peculiarities of the liturgical hymns of the Coptic Church.

–        November 2019 – participation of a representative of the Coptic Church’s diocese of Los Angeles, Sister Joanna (Michael), in the DECR-held international conference on the Church’s Care for Mentally Sick Patients: Religious Mystical Experience in Mental Health.

–        December 2020 – speech by Coptic Patriarch Tawadros II in the international online conference on the situation of Christians in Africa, organized by the DECR and the Russian Religious Freedom Association.

–        Throughout the recent years, the Moscow Patriarchate and the Coptic Church have been working together on a regular basis in monitoring the religious situation in Africa. The common work to defend the rights of Christians has been carried out by representatives of the two Churches in several African countries wh ere it is an urgent problem.

An opportunity is studied for a meeting of Russian and Coptic church experts to discuss the position of the two Churches on the most problematic challenges of today’s society in the sphere of bioethics.

X. Cooperation on the level of international platforms

This cooperation, which has been successfully carried out throughout the recent years, was especially vivid at major events of the World Council of Churches held this year – the Orthodox Pre-Assembly on May 10-15 in Cyprus, the Central Committee meeting on June 14-19 in Geneva, and the General Assembly on August 31 – September 8, in Karlsruhe.

During his meeting with His Holiness Patriarch Kirill, Metropolitan Serapion of Los Angeles, speaking on behalf of the Coptic Church, expressed support for the Moscow Patriarchate ‘in connection with the present grave situation full of challenges and the hope to fully and successfully overcome it in the near future’.

On September 21, the Commission members visited the Russian University of the Friendship of Nations – one of the leading universities in Moscow, in which Coptic students are traditionally represented. The university is also a longstanding partner of the Coptic Church in implementing international educational projects in Egypt. This cooperation is planned to become broader with the help of the Department for External Church Relations of the Moscow Patriarchate and the Rossotrudnichestvo federal agency. Discussions have been held on the plans of cooperation in the next years. The agreements reached in them have been reflected in the Cooperation Agreement signed by Mr. A. V. Dolzhikova, director of the Institute of Russian Language, and Ms. B. Soliman, head of the Coptic Patriarchate’s church projects department.

On September 24, the Coptic members of the Commission and DECR secretary for inter-Christian relations Hieromonk Stephen (Igumnov) met with a group of young believers of the Coptic Church who are studying in Moscow higher education institutes. They discussed several practical issues involved in each student’s training. They also considered plans for organizing similar meetings in the future.

During their stay in Moscow, the Coptic Church representatives visited the Convent of the Protecting Veil, in which they venerated the honorable relics of Blessed Matrona of Moscow and were warmly welcomed by the mother superior Feofania (Miskina) and sisters. They also had a brief meeting in the convent with Metropolitan Eugen of Yekaterinburg and Verkhoturye, who came to the capital city to attend an Assembly of Abbots and Abbesses of the Monasteries of the Russian Orthodox Church.

The guests visited the Ss Martha and Mary Convent of Mercy, wh ere they were warmly welcomed by Mother Superior Elisabeth (Pozdnyakova). They venerated the shrines of the cathedral church and familiarized themselves with the convent’s social projects. In conclusion of the Moscow program, the delegation walked to the historical center of the Russian state’s capital city.

The next session of the Commission is planned to take place in 2024 in the territory of the Coptic Church.