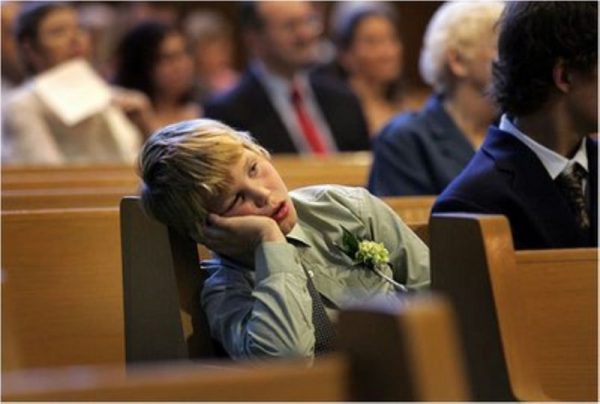 Last Sunday, our church did its annual multilingual service, with three congregations—Mandarin-speaking, Spanish-speaking, and English-speaking—all coming together for worship. We had readings in multiple languages, and a sermon was given in Spanish with an English translator. There was no Sunday school this week, so kids joined their parents in adult church.

When we informed our kids Sunday morning of what would be happening, there was a collective and passionate, “NOOOOOOOOOOOO!” (Honestly, I should have typed more o’s to reflect the true level of protest.)

“PLEASE, let us stay home! We can do home church! Please not THAT service! It’s SO BORING!”

Apparently, they remembered it well from the prior year. We dragged them into the car in spite of the whining and endured their pleas all the way there.

I’d be lying if I said this was a rare occurrence of my kids not wanting to go to church. The nature of this service perhaps made them complain more loudly than normal, but there are plenty of typical Sundays when our kids ask, “Do we have to go?” I’d bet a lot of money that you’ve been asked the same.

The running theme of kids’ complaints is usually that church is boring and they don’t want to go because of it. Parents tend to assume it’s their job to convince their kids that church isn’t boring and are looking for ways to do so.

But that’s a really bad assumption.

I think there are actually quite a few legitimate reasons why so many kids are bored by church and/or Sunday school. In other words, kids aren’t always just making up random excuses to not go; a lot of times, their avoidance reflects a genuine problem.

Here are several “legit” reasons for boredom at church that parents should consider.

1. There’s too much emphasis on fun at Sunday school.

This probably sounds counterintuitive. After all, if Sunday school is a lot of fun, then kids should want to go, right? No, no, and no. Now, if Sunday school truly was some kind of incredible amusement park-like experience, that could be the case (and kids would choose to go for the wrong reasons). But Sunday school “fun” usually consists of relatively mild amusement like crafts, foosbal, or maybe an indoor relay race using spoons and M&Ms.

This kind of “fun” can never compete with your child’s idea of fun at home, where they can do anything they want.

Of course they will want to stay home; church fun is boring compared to home fun. When a Sunday school program focuses on entertainment, this is the natural apples-to-apples comparison a kid’s going to make. Who can blame them?

If most of what your kid takes away from church is that there’s a little lesson with a lot of social time, you’re going to have a hard time convincing them that “church” isn’t boring (when “church” is Sunday school entertainment in their mind).

2. “Adult” church is beyond their current grasp.

Parents sometimes try to get around the lack of substance found in many Sunday school programs by keeping their kids with them in “adult” church each week. This can work really well for some kids. My 11-year-old daughter has recently been opting out of Sunday school to come with us to adult church because she’s able to follow along and says she learns much more than in class. When my 9-year-old daughter saw that her sister was doing this, she wanted to come too. But when she did, she spent most of the service with her head on my shoulder trying to sleep—she just doesn’t have the interest or attention span yet that my older daughter does. When she told me after church that day that it was boring, I told her, “Of course it was! You chose to sleep!”

For kids like my older daughter, who want to attend adult church in lieu of Sunday school, this can be a great choice. But for those like my younger one who aren’t ready to track with what’s being taught and instead spend the time doodling in a bulletin or daydreaming, boredom will be the inevitable outcome. That doesn’t necessarily mean that kids’ Sunday school will be seen as less boring, but rather that adult church isn’t always the answer.

Every pastor I know laments the fact that families are attending church with less regularity than they used to, for all kinds of reasons (Sunday morning sports being a big one). A “regular” attender is now someone attending once per month.

I know this is going to rub some people the wrong way, but it’s important to say: A church could have the best Sunday school program in the world, but if a family only attends sporadically, it’s natural that a child will find it boring—they’re not really connected to what’s going on or what’s being taught. You can’t blame a kid for mentally checking out at that point.

4. Faith in their family is mostly about going to church on Sundays.

Even if your family attends church every week, if you’re not regularly praying together, studying the Bible together, and having conversations about faith at home, your kids will rightly wonder why they should bother going to church. Church will come to be seen as just one more thing they have to do each week, without any meaningful connection to their daily lives. In other words, it will become an unnecessary time burden in their minds because it’s irrelevant for the rest of the week.

5. They regularly engage in deep faith conversations at home.

Here’s another counterintuitive point, but I’ve seen it happen in a lot of families that are very committed to their faith. If your family consistently has deep faith conversations (the kinds I write about in my books, Keeping Your Kids on God’s Side and Talking with Your Kids about God), in all likelihood your kids are gaining a far more intellectually robust faith than they’ll get from the average Sunday school—and Sunday school will seem extremely boring in comparison. A telltale sign that this is the problem is when your kids complain they aren’t “learning anything” or say that it’s the “same stories over and over.”

Though parents often assume there’s some kind of problem with their kids’ spiritual development when they don’t want to attend Sunday school, it can mean the opposite in this case; kids may simply have much higher expectations for what should be discussed in a Sunday school environment and be bored by the 600th telling of Noah’s ark followed by popcorn.

6. They have doubts about God or the truth of Christianity.

It should be obvious, but I’m surprised how many parents never consider this possibility: If kids have stopped believing in God or in the truth of Christianity, they’re going to find church boring.

Imagine for a moment that you had to attend a church (or other group) you didn’t agree with every single week and someone expected you to take interest. They study a book you think is fiction, but apply it as truth in their lives and think you should too. Chances are, you’d find that boring because you don’t believe what they do. Why study a fictional book so deeply each week?

In the same way, kids who no longer hold a faith in Jesus are going to get tired of hearing about Him every Sunday. It’s outside the scope of this post to weigh the pros and cons of making such kids attend church, but there are two points for our current purpose to take away here:

On the drive to the church service I described at the beginning of this post, I turned to the kids in the back of the car and said, “Hey guys. I have something surprising to tell you.” They got quiet, and I continued.

“I don’t feel like going to church today either. I don’t really enjoy this particular service. I would rather be at home this morning.”

They looked at me with wide eyes, anticipating we might go home.

“But I’m going anyway. You see, as humans, it’s often easiest and very tempting to stay home from church on Sunday mornings. That’s a totally normal feeling, and adults have it too sometimes. But we make it a priority to go in spite of those occasional feelings for several reasons: 1) It’s one way of putting God first in our lives (by committing to church each Sunday morning); 2) Church isn’t only about learning—it’s also about worship, and worship transforms our relationship with God; and 3) It’s important to develop relationships with other believers and be in community (Hebrews 10:25). I’m not going to church this morning because I can’t think of anything else I’d like to be doing, but rather because I love the Lord and this is one way I put him first.”

In other words, I explained to them why their boredom shouldn’t be the deciding factor in attending church.

I didn’t try to convince them that they shouldn’t ever think church is boring.

This is a critical distinction for kids to understand, because as I’ve hopefully shown in this post, there are many legitimate reasons why kids may find church boring at times. When they understand why church matters even when they find it boring, it can lead to far more productive conversations than just ramming heads every Sunday morning.