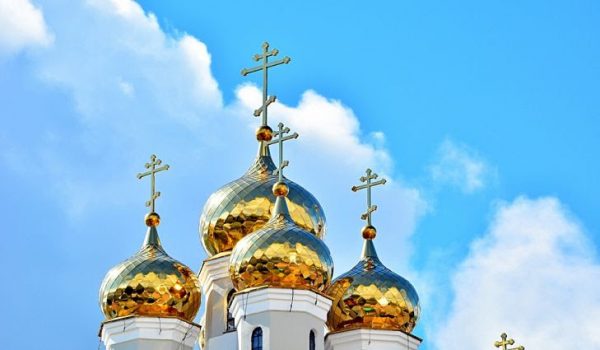 Salt Lake City – A decade of growth has more than tripled the worshipers at Sts. Peter & Paul Orthodox Christian Church, leaving parishioners shoulder-to-shoulder for Sunday services – and overflowing down the stairs and outside for holidays and major feast days.

The solution, following an 18-month search for suitable property, was the purchase of a 5.5-acre rural plot of land in Payson. Sts. Peter & Paul, having gained the blessings of the Utah County town’s planners and city council, hopes to begin construction in mid-June.

“It’s a beautiful problem,” says the Rev. Fr. Justin Havens, pastor of Sts. Peter & Paul, “and for many years we have been looking for a solution; it became apparent that would be building a new, sister church.”

The nave of Sts. Peter & Paul, the historic, Moorish Revival style, red brick and wood church at 355 South 300 East in Salt Lake City, regularly packs in more than 200 for Sunday liturgies; some 400 Orthodox Utahns call Sts. Peter & Paul – which began as a Jewish synagogue in 1903 – their spiritual home.

Tentative plans are for His Eminence Metropolitan Joseph of the Antiochian Orthodox Christian Archdiocese of North America, who has enthusiastically blessed the new church project, to consecrate the new Payson church in late fall or early winter of this year. (More specific information on his visit will be provided when finalized).

Fr. Havens says the choice of Payson is perfect for his rapidly-growing congregation, half of which is comprised of converts – including former Catholics, Protestants and Latter-day Saints, as well as Jews, Muslims, Buddhists, atheists and agnostics – as well as a rich, multi-ethic mix of Russian, Greek, Serbian, Ukrainian, Romanian, Bulgarian, and Middle Eastern Christians.

“Among them are many families who have been driving in, sometimes up to an hour away, from the southern Salt Lake Valley and Utah County. We decided our second church should be in Utah County, a more convenient location for those folks,” Havens explains.

The new site, located on farmland, offers a country atmosphere, stunning vistas of the Wasatch Mountains, and an open grassy area where the parish’s children can do something they cannot at the downtown Salt Lake City church amid busy streets and concrete: run and play.

“It also will make for a beautiful spiritual refuge, both for our own folks and the many who are seeking for God in this chaotic and anxious world,” Fr. Havens adds.

The purchase of the land was made possible by the sacrificial giving of parishioners, who raised $400,000; a generous private benefactor also committed a $350,000 matching grant for the first phase of the Sts. Peter & Paul-Payson project – a rustic wood Russian-style chapel able to serve 140 worshipers, and a parsonage.

Fr. Havens says he also is grateful to the welcome the community of Payson has offered to him, as a soon-to-be new neighbor, and Sts. Peter & Paul’s parishioners in general.

“We are overjoyed and humbled by the love of the folks at Payson City as well as the local people. We believe it will be a true lighthouse for the community and Utah,” he says.

Future phases of the site call for the first dedicated Orthodox Christian Cemetery in Utah, a fellowship hall, and finally, a new, large Byzantine-style cathedral. The timing of those later phases of the Sts. Peter & Paul-Payson project will depend on ongoing fundraising efforts. Visit the church’s capital campaign website for additional information on that.