A Different Take on Ideas of Sin and Repentance

The concept of sin carries much baggage in modern thought. Many associate it with guilt, with beating oneself up over things in the past, with the misguided control mechanisms of medieval Christianity. An unhealthy notion, "sin" promotes a denial of freedom. Few have sins to repent of nowadays. At worst, we have "issues" to "work through."
Priest Barnabas Powell | 12 January 2012

The summer after my first year of university, I spent a month in a monastery. This was something I’d wanted to do since becoming Orthodox the year before, but a pair of painful breakups provided a helpful boost.

I should note that this generally isn’t considered the healthiest reason to consider monasticism, which isn’t founded on a rejection of marriage any more than marriage is a rejection of monastic life, but having my world shaken up certainly provoked a critical re-evaluation of my direction.

Who is God calling me to be? The question preoccupied me to distraction, and I was determined to get some answers.

When I heard an abbot speak at a Lenten retreat, I was determined to test a potential vocation. My monastic pilgrimage held much treasure, but the most valuable was its role as a spiritual boot camp, with special training in the way of repentance.

The concept of sin carries much baggage in modern thought. Many associate it with guilt, with beating oneself up over things in the past, with the misguided control mechanisms of medieval Christianity.

An unhealthy notion, “sin” promotes a denial of freedom. Few have sins to repent of nowadays. At worst, we have “issues” to “work through.”

Such an understanding of sin, and of repentance, is misguided. The Greek term, hamartia, literally means “missing the mark.” This can be the result of deliberate choice, but more often of weakness, failure, or even ignorance.

If I fail to be mindful of another, I’ve missed the mark, even if unintentionally. Sin is any deed (even word or thought) that shackles our movement toward perfection.

Given this broader understanding of sin, repentance also is more holistic than we might assume. The Greek metanoia literally means “change of mind,” but we’re not talking about a switch from fried rice to spring rolls. Metanoia connotes the transformation and renewal of the very center of one’s being. 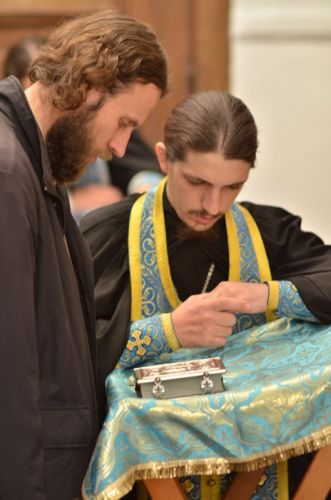 The process is intense, but there’s help. Metanoia isn’t a solo exercise.

Very early in the life of the church, a sacramental form of repentance developed, known as confession. As with AA, accountability is key. In parish life, I was used to confession on a monthly basis. In the monastery, it was done daily. Such was the battlefield I’d entered.

How am I possibly going to come up with a new sin to confess every day for a month? I wondered. By Day 3, I was fresh out of sins. I’d gone through every one I’d brought with me, and once confessed, I couldn’t return to it unless I fell into it again.

I worried about Day 4. Then the abbot told me to dig deeper.

I began to evaluate my thoughts and attitudes, and no longer just my deeds. Much of what I found disturbed me.

At first, I was relieved to have found anything at all. Then the warfare began — the effort to control my thoughts and impulses rather than be controlled by them.

It was exhausting, but as the days and weeks passed, I began to feel as if my very being were growing lighter, freed from the false self promoted by the parasite of sin.

Leaving the monastery was one of the hardest things I’ve done (though I thought I’d return), and it didn’t take long to squander what progress I’d made, but as one monk explained to a visitor when asked, “What do you do in this monastery?”— “We fall down, and we get up again.”

Only God never falls. Only the devil never gets back up. For the rest of us, there is metanoia.