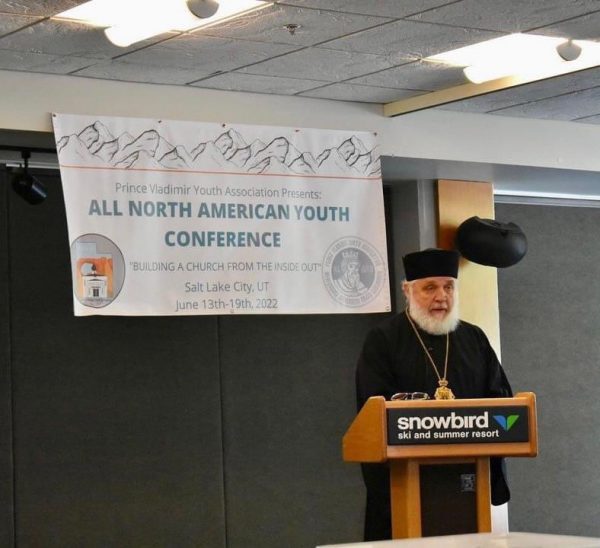 On 14 June, 2022, a North American Youth Conference opened in Snowbird, UT. This is the first such youth event of the Russian Orthodox Church Outside of Russia since the pandemic began. Two similar events were held earlier in Paris and San Francisco.

One hundred participants from 23 American states and Canada, age 18-25, are participating. The event commenced with His Grace Bishop James of Sonora performing a moleben before a good work, as a youth choir sang under the direction of Stephan Sveshnikov.

His Eminence Archbishop Gabriel of Montreal and Canada presided over the opening of the conference, delivering a speech on how such youth gatherings began when he was still a seminarian, paying special attention to the importance of missionary work as exemplified by the life of the late Metropolitan Hilarion. Bishop James then read a lecture titled “You Are the Temple of the Living God.”

The youth then split up into 8 groups, each of which was charged with preparing a project to introduce into their local parish life.

An akathist was then performed before the Myrrh-streaming Iveron-Hawaiian Icon of the Mother of God in St George Church in nearby Salt Lake City.

Speaking at the event will also be Patricia Klar, who for many years organized youth choirs on the parish level, and Eugen Kulesha, a director of Camp NORR (Association of Russian Explorers Outside of Russia).

The young people will learn to record podcasts on various subjects and discover the work of the St John of Shanghai and San Francisco Foundation. Also scheduled will be a teleconference with Orthodox youth in Germany.

The conference will conclude with the traditional talent show.