A Pannikhida is Served Over the Grave of Archimandrite Antonin (Kapoustin) 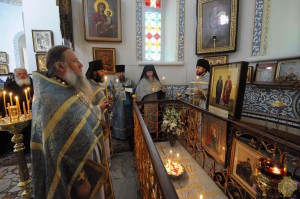 April 6 (24 o.s.), 2013, was the anniversary of the death of the eminent Chief of the Russian Ecclesiastical Mission in Jerusalem, founder of Russian Palestine, Archimandrite Antonin (Kapoustin), who headed the mission from 1865-1894. Over the course of 29 years of service in the Holy Land, he acquired a massive amount of real estate, including sites of historical Old and New Testament importance. The servant of Russian Palestine was buried in the cathedral he founded at Holy Ascension Convent on the Mt of Olives in Jerusalem.

On April 6, 2013, after Divine Liturgy, a pannikhida was performed over his grave by the Chief of the Russian Ecclesiastical Mission in Jerusalem of the Russian Orthodox Church Outside of Russia, Hieromonk Roman (Krassovsky).