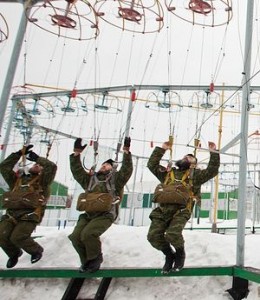 In the Ryazan region in Russia, chaplains will make a jump parachute together with military personel. Priests from the landing forces are expected to make two training jumps from An-2 and Il-76 airplanes. Army chaplains are furthermore supposed to master the packing of D-6 and D-10 parachutes, reports Regions.ru

During military exercises the clerics are also expected to bring down with them on a parachute a portable church kit, which they will assemble on the landing ground.

At the moment, eight Orthodox chaplains are serving at military units of the Russian Airborne Troops. There are masters of airborne training among them: Father Sergy (Arkhipov) has made over 600 parachute jumps, and Priest Savva Shcherbin has made over 450 parachute jumps. Such training is systematic and held annually.