A priest’s mission among deaf people: “I can be their voice in the face of daily problems” 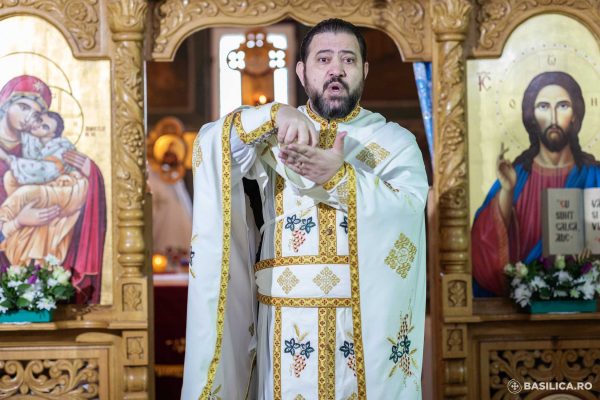 People with hearing and speech impairments in Bucharest celebrated last Friday their spiritual protector, Saint Meletios, the archbishop of Antioch, who explained by signs the Holy Trinity’s mystery when his mouth was covered so that he would not speak.

Father Ilie said that his place is with these people and that he does not find fulfilment elsewhere.

How did the mission start?

“I only served in the social field, and it is the place where I will never leave,” said the priest. He was a priest at the Rahova jail. Then he assisted those sentenced to life in prison. He served at the residential care home for children with AIDS and at the Ciolpani Retirement home.

There he had his first contact with deaf people.

“There were three deaf people, and I wanted to be able to communicate with them, but there was a big gap between them and me, and then I enrolled in a sign language course.”

“I remember the first day I came in and asked them, ‘What are you doing (placing both fists together- the sign language equivalent)’ they looked at me in amazement. They knew no signs. They had not attended school. Their parents had taught them to write rudimentarily. Then one of the women there, Gica, wrote to me on a piece of paper: You, sick? I said: No. I learned the signs. To which he said to me: We do not signs.”

“That’s when I first realized in my life that when you want to love someone, you have to take them in your arms, hold them tight, and God shows you a way to communicate, maybe even through empathy.”

After nine years of ministry at Ciolpani, the priest went to pastor the deaf. It was difficult for him to separate from his elders, he said.

“For me, everything was there actually. I had died with every older man I had taken to the pit, and at the same time, I had risen with every assisted one who came and occupied that free bed. I knew each story. I tried to make their lives beautiful, but I obeyed (the bishop) and came to the deaf community.”

He soon realized that he was facing a new challenge. After the first Divine Liturgy, the following Sunday, the church was empty. Those in the community were reluctant to the priest sent to pastor them.

But through dialogue and action, the priest showed them that he had the best intentions.

“I told them, ‘Let me prove to you that I have come with all sincerity and I want to take over your culture. Slowly, slowly, in 9 years, it became a united community, and we overcame many challenges.”

Father Ilie Mirel said that these people made him meditate more on life in general and his mission.

“I realized that I am a rich man, they can’t talk, I can talk. Instead, I can be the prolonged voice of their desires in the face of all the problems they face every day.”

The deaf community is grateful to the Romanian Orthodox Church for its support, said Father Ilie. Because the Church “has turned to their needs and so they can know the Word of God, they can confess, receive the Eucharist, baptize their children, participate in their marriage and, above all, understand what happens during services.”

“They now understand what is happening, what God wants from them, what their mission is. The Romanian Orthodox Church offered them precisely this possibility to know Christ and to struggle for a place in the Kingdom of Heaven.”

Father Ilie advised that we who do not have such problems should help them by accepting them with love. “And let’s smile at them. And when we talk to them, let’s do it slowly and clearly, so that they can read on our lips.”

“Unfortunately, in everyday life, when people see us talking through signs, they step aside as if we had a disease that would catch on.”